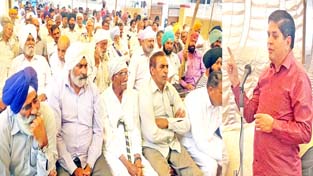 Excelsior Correspondent
SAMBA, Apr 8: Exhorting upon the displaced people to put a united face in the forthcoming Parliamentary elections, the SOS International, chairman Rajiv Chuni today appealed the PoK refugees to teach a lesson to BJP for weakening refugees’ case at the cost of KPs.
Launching “Refugee Jan Jagran Abhiyaan”  during  a rally at Ramgarh in Samba district today,  Chuni appealed the members of displaced community from POJK  to spread  this message among the  displaced community to cut across the socio-religious lines and stand united like a wall to frustrate the designs of corrupt and opportunist politicians who discuss the issues related to the community, but never bother to initiate any process to resolve these issues once they occupy the seat of power.
Chuni vowed to make his people to change the precedence of  70 years, during which the community remained scattered, by uniting them to fight for the justice which has been eluded to them by these politicians. “If the elections are opportunity for political parties, then it is equally an opportune time for us  to put pressure on the parties, which are at the helm of affairs because after the elections are over, these political activists will disappear again till the next poll,” he remarked.
He stressed that the relief package of PoK DPs should not be made hostage for long time. “Why quick decisions are made at State & Central levels for granting different relief measures in favour of Valley migrants during the last 4 years of Modi Government, which includes budgetary provisions in Central budget, enhancement of monthly cash assistance from Rs 6800 per month to Rs 10,000 per month, Rs 20 lakh to each family for return to Kashmir Valley, a Government  job to at least one person from a family for return to Kashmir valley, extension of reservation for another two years for the wards of Valley migrants in professional  and technical colleges besides in IITs & IIMs throughout the Country,  free health insurance cover to all migrant families living inside or outside J&K State,  besides so many other relief measures.
DK Bhatti, VK Datta, Ved Raj Bali, Jagdish Raj, Capt Tirath Ram and others also spoke on the occasion.