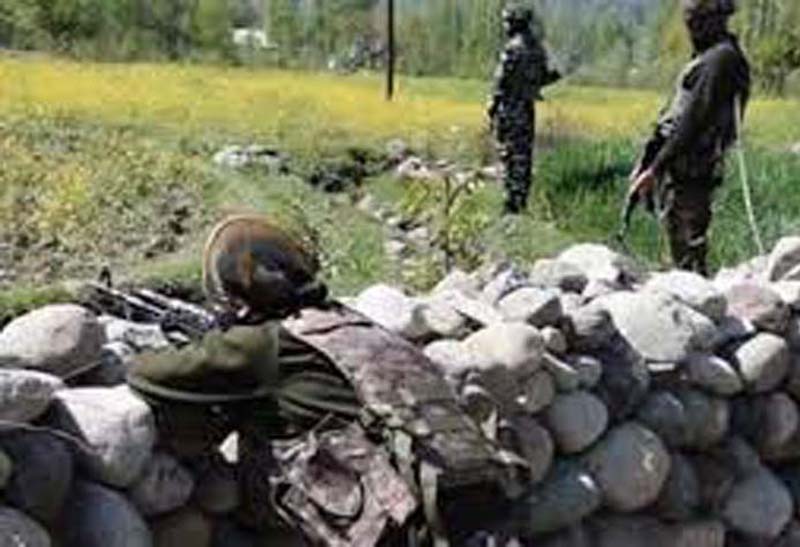 *Residents suffer due to lack of bunkers

Fayaz Bukhari
Srinagar, Nov 14: India and Pakistani troops exchanged firing along the Line of Control (LoC) in Tanghdar sector of North Kashmir’s Kupwara district today in which five persons were injured and several houses damaged.
A senior security official said that Pakistani troops violated ceasefire this morning in Tanghdar sector by firing at Indian forward posts and civilian areas. He said that Army gave befitting reply to Pakistani shelling and inflicted casualties on them.
Five persons were injured, one of them critically, while two houses were destroyed and over a dozen partially damaged in Pakistani shelling in Tanghdar.
Five persons were injured in the shelling in Saidapora Gali and Praza area of Tanghdar sector when shells fired by Pakistani troops landed in civilian areas. The injured have been identified as Abdul Majid Bhat son of Abdul Jabbar of Praza Tanghdar, Ghulam Rasool Bhat son of Mohammad Sikander Bhat, Mohammad Aslam Bhat son of Nur Hussain, 19, Gulistana Begum wife of Abdul Rehman Bhat and Amjad Bhat son of Abdul Rehman Bhat all belonging to Saidpora Gali, Tanghdar.
Mohammad Aslam Bhat was critically injured and he has been shifted to Srinagar for treatment. His condition is stated to be critical.
Houses of Mir Alam son of Mohammad Abdullah and Abdul Qayoom Bhat were fully damaged in the Pakistani shelling while around one dozen houses were partially damaged in the shelling.
Tanghdar sector has seen frequent shelling since August this year and the area is without underground bunkers. The lack of bunkers has put the lives of thousands of people living along the LoC in North Kashmir at risk.
In the meantime, a militant identified as Adil Ahmad Mir resident of Arihal Pulwama today surrendered before the police in Pulwama. He was associated with Hizbul Mujahideen and has gone missing on July 27 this year. However, he surrendered without any arms and ammunition. He is being questioned by the police.
Sources said that he had lost his sight in left eye as he has suffered pellet injury and his leg was also broken in the past and he is limping.
Security forces today averted a major tragedy when they detected an Improvised Explosive Device fitted in a 5 litre pressure cooker near EDI in Pampore area of South Kashmir. The traffic was stopped on the road for at least one hour and the area was cordoned off and Bomb Disposal Squad was rushed to the spot and the IED was taken to Awantipora area of Pulwama. It was later defused.
Security forces including Jammu and Kashmir Police and Army’s 44 RR, 1 RR and 55 RR cordoned off Maldera, Heff Shirmal, Sugan and Heff Khuri areas of Shopian district in South Kashmir today. The searches were launched by the security forces after inputs about presence of militants in these village, however, no one was arrested.