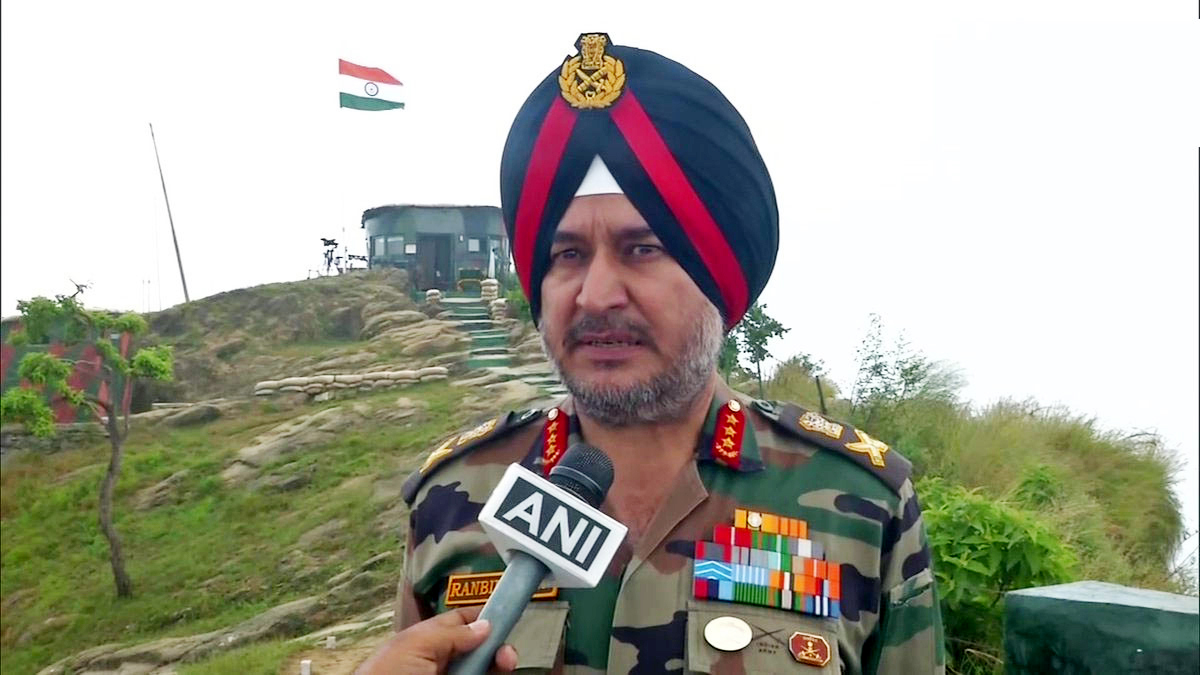 Army warns casualties if PoK civilians violate LoC
All intrusion attempts foiled
Sanjeev Pargal
JAMMU, Sept 15: Amidst heightened tension between India and Pakistan on the Line of Control (LoC) in Jammu and Kashmir, India today firmly conveyed its concerns to Pakistan on unprovoked ceasefire violations on the LoC to support cross-border infiltrators and militants even as Northern Command chief Lt Gen Ranbir Singh warned Pakistan against its attempts to instigate civilians to violate LoC saying there will be casualties on other side and the responsibility will lie on Pakistan and its army.
“There have been more than 2,050 unprovoked ceasefire violations this year, in which 21 Indians were killed,” External Affairs Ministry spokesperson Raveesh Kumar said.
His statement comes just a day after Pakistan army targeted civilian locations along the LoC in Mendhar and Poonch sectors in which number of school students were trapped and had to be rescued by the Army in bullet-proof bunkers.
“We have highlighted our concerns at unprovoked ceasefire violations by Pakistan forces, including in support of cross-border terrorist infiltration, and targeting of Indian civilians and border posts by them,” Kumar said.
He added that India has repeatedly called upon Pakistan to ask its forces to adhere to the 2003 ceasefire understanding and maintain peace and tranquility along the LoC and IB.
India and Pakistan had entered into ceasefire agreement in November 2003 during Atal Behari Vajpayee regime. The ceasefire remained in force for quite some time but then Pakistan started its violation to push infiltrators into Jammu and Kashmir.
Indian troops, Kumar added, were showing “maximum restraint and respond to unprovoked violations and attempts at cross-border terrorist infiltration”.
Tensions between India and Pakistan, which have been running high since a Jaish-e-Mohammad suicide bomber martyred 44 CRPF troopers in February, rose further after New Delhi scrapped the special status for Jammu and Kashmir and bifurcated the State into two Union Territories into J&K and Ladakh on August 5.
Meanwhile, Northern Command chief Lt Gen Ranbir Singh today strongly reacted to proposed `LoC Chalo’ call given by Pakistan Prime Minister Imran Khan.
In a chat with a video news agency, Lt Gen Singh said there have been attempts in Pakistan for past couple of days to instigate civilians and locals in Pakistan occupied Kashmir (PoK) to come close to the Line of Control or even cross the Line.
“However, I would like to caution Pakistan not to use civilians of Pakistan occupied Kashmir as cannon fodder. Indian Army is very clear. Should there be any attempts at violation of the Line of Control, they shall be responded to very very effectively. There will be casualties on other side and the responsibility will lie on Pakistan and its Army,” the General Officer Commanding-in-Chief (GOC-in-C) Northern Command said.
Lt Gen Ranbir Singh said: “Our military strategy is very clear. All infiltration attempts along the Line of Control have been foiled. We have very effective multi-tier and dynamic Counter-Infiltration Grid which has been able to ensure thwarting of all infiltration attempts by the militants on the Line of Control”.
The Northern Command chief said the Army also has robust and effective Counter-Terrorism Grid in the hinterland which has been able to ensure very high degree of stability (in the hinterland).
“There hasn’t been any major terror incident in the past some time,” he added.
Asserting that Army has very calibrated and pro-active approach on the Line of Control, Lt Gen Ranbir Singh said unfortunately Pakistan and its army has been using last couple of weeks to infiltrate militants into Jammu and Kashmir through the LoC to cause disturbances under the cover of ceasefire violations. However, he declared, all such infiltration attempts have been foiled.
It may be mentioned here that post abrogation of Constitutional provisions of Jammu and Kashmir and bifurcation of the State into two Union Territories of J&K and Ladakh, Pakistan has repeatedly been violating ceasefire on the LoC especially in Rajouri and Poonch districts.
Four Indian Army jawans and a civilian have been martyred so far. In retaliatory action by India, at least 19 Pakistan army personnel have been killed and over two dozen others were injured. Pakistan army has also suffered heavy infrastructural damages on the LoC.
There have been reports that large number of militants of Jaish-e-Mohammed (JeM) and Lashkar-e-Toiba (LeT) outfits have gathered at launching pads located close to LoC in PoK and Pakistan army was trying to facilitate their infiltration into Jammu and Kashmir but hasn’t succeeded due to strict surveillance by the Indian troops.