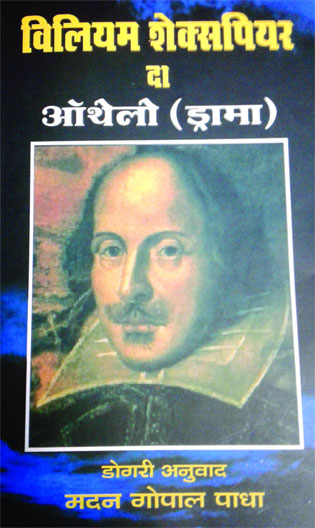 Susharma
I turned the pages of Mr Madan Gopal Padha’s Dogri translation of William Shakespeare’s tragedy Othello, The Moor of Venice (Highbrow Publications, Bari Brahmana, Jammu, pp 174, Rs 400/-) with much anticipation. One, it is Mr Padha’s second attempt to bring the Bard’s works toDogri readers (he published a translation of Julius Caesar in 2014). And two, Othello remains one of the most fascinating studies of human vices of jealousy and vengeance.
The volume carries a forward by Prof Lalit Magotra and curiously, a forward that was penned in 2015 by Mr Ved Rahi for Mr Padha’s Julius Caesar in Dogri. In his preface, Mr Padha gratefully acknowledges Prof Shashi Pathania’s pains she has taken to rectify spelling mistakes.  Indeed, to Prof Pathania goes the credit of                 giving us an error-free Dogri text.
That in no way takes away Mr Padha’s own achievement. His translation measures up to the yardstick proposed by Mr Ved Rahi, who says, “A translation is not merely a transposition of words from one language to another.  A real translation involves rendition of the meaning of the original and through that meaning to recreate the effect that the author has produced in his work (p.9).” (My translation from original Dogri).
Othello, the protagonist, is a well respected general of Negroid lineage and of mature years, who falls in love with fair Desdemona and marries her, disregarding the differences of age and the skin colour that exist between them as also the strong opposition of her rich and influential father, Senator Brabantio. But the general has not reckoned with his own subordinate, Ensign Iago, whose claim for promotion to lieutenant he has overlooked in favour ofthe handsome Cassio.  Then on, it is Iago and his all-consuming vengeance all the way, that brings death and infamy both to Othello andDesdemona and kills Roderigo, her unsuccessful suitor, too.Iago’s tricks, his machinations and the ghastly treachery have been so deftly brought out in Mr Padha’s translation that you can hardly desist from hurling the choicest Dogri invectives (do we have any dearth of such oral missiles!) at Iago. His prolific – and apt – use of Urdu words is another asset of this work.  In Act III, Scene IV, for instance, there are at the least seven Urdu words in a Cassio- Desdemona dialogue (refer page 111).  Borrowing from other languages is a welcome trend, as it would enrich Dogri.
Mr Padha has made brave efforts to match Dogri/Indic expressions with those of the Elizabethan English. dle ekydh nh for ”s blood’ (Act 1, Scene 1, p.18), ^lr cpu!* for ‘Well.’ (Act II, Scene I, p.62) and ^bDd NVkdh ‘kk ch ?kV~V* for ‘not past a pint’ (Act II, Scene 3, page 67) are some of the instances. And here is a gem of an oxymoronic Hindi-Urdu phrase that he puts in Iago’s mouth, in Act IV, Scene 1 at page 115: ^nks’k eqDr xqukg*!
I wish MrPadha were consistent in his effort in his use of language. There are places when the Dogri word/expressionsused by him seem outlandish, if not downright funny.  Take for example the word ^pxka@paxs* for ‘good’.  It is fine if used occasionally as an endearment by either of the spouses.But how about ^esjs paxs vkdk^ mouthed by a very junior military officer to his own general? That might have seemed all right when a sixteenth century British/European ensign spoke to his top military boss in a tense moment.  But, in the context of our culture, no Dogra lieutenant (nor even a brigadier) ever dare address his general ^esjs paxs vkdk^ .  Adapting to the culture of the target language is an important factor of translation, one must remember.
The book could have done with some revision.  In Act IV, Scene 3 (page 144),      a dialogue between Emilia and Desdemona has been jumbled up.  The original text goes like this:
Emilia:          Come, come you talk.
Desdemona: My mother had a maid call’d Barbara:
She was in love…
In Mr Padha’s translation, the two dialogues have been clubbed as one and wrongly attributed to Emilia. Then, the word ‘Ensign’ has been variously (and erroneously) spelt out in the Devnagari, all versions ending in the sound ^V^. Theaccepted pronunciation is ^,ulkb±u* or ^,ulh;u*. The misspelt words of English used in the book leave a jarring effect, as does a longish footnote in English at page 80, which does not quite make sense. For that matter, what are the English words/footnotes doing here?  This is a translation work meant for the people who have little access to that language.
Nevertheless, borrowing from the words of Prof LalitMagotra, Dogri welcomes Mr Padha’s translation of Othello.