Excelsior Correspondent
KATHUA, Sept 30: In a scathing attack full of sarcasm, Union Minister and Member of Parliament from Udhampur-Kathua-Doda Lok Sabha Constituency, Dr Jitendra Singh said here today that as the day of polling for Urban Local Bodies (ULBs) draws closer, an interesting scenario is developing, wherein most of the opposition political parties have fled from the election fray, thus leaving stray Independents to face the BJP candidates.
Addressing a Party meeting attended by BJP candidates contesting election for Kathua Municipal Council and the two Municipal Committees of Lakhanpur and Nagri, Dr Jitendra Singh said, as far as Congress is concerned, many of its prospective candidates have refused to accept the Party mandate because they realize that the tag of the Congress Party might end up further reducing their vote share. As a result, many of the Congress party aspirants have instead filed their nomination papers as Independent candidates on different symbols.
Similar is the dilemma of National Conference (nc), said Dr Jitendra Singh, whose aspirants have defied the Party leadership’s boycott call and filed their nomination papers as Independents with bizarre symbols ranging from scissors, matchbox, flute, etc. Adding another comic aspect to the scenario are the members belonging to disgruntled fringe elements who have been either expelled or sidelined by the BJP and have entered the poll fray with a sadist design to act as spoilsport, he added.
Calling upon the BJP candidates to jump into the election campaign with full vigour and confidence, Dr Jitendra Singh said, the BJP candidates have a huge advantage over all these stray opponents, because they carry no baggage from the past, for which they should owe an explanation to the people. At the same time, he said, they belong to a Party whose leadership, under Narendra Modi and Amit Shah, inspires instant support because of its integrity and commitment.
Enumerating several path-breaking development works seen in Kathua during the last four years, ranging from Bio-Tech Park to Keediyan-Gandiyal bridge, Shahpur Kandi Dam to Ujh Multipurpose Project, Engineering College to Medical College and new University campus, Juthana bridge to Lakhanpur Highway, Katra to Delhi Express Road Corridor via Kathua for which survey is going on to Chattergala tunnel undetaken by BEACONS, Seed Processing Plant, to a network of new roads and bridges with State’s highest allocation for PMGSY roads, Biotech park at Ghati, Kathua, four-lanning of Jammu Akhnoor road on which work has begun Dr Jitendra Singh called upon the Party candidates to go from door to door and raise the question, why all these development works were not undertaken during the last 65 years, when Congress and its allies were at the helm of affairs and also represented this region in Parliament, State Assembly and local bodies. He said, those who were opposing us today have been Ministers in the past, we are proud to have done in just four years what they could not do during their long tenures but, we are not so naive as they think and therefore, each day, we will keep reminding the people about their non-performance, their misappropriations and their corrupt practices.
It will be a vigorous election campaign, said Dr Jitendra Singh, wherein the BJP candidates will not hesitate in disclosing the dubious past and the corruption scams of the opponents when the latter were a part of the ruling hierarchy
BJP State Vice President, Harinder Gupta, MLA Kathua Rajiv Jasrotia, BJP State Secretary Raghunandan Singh Babloo, party district president, Prem Nath Dogra were among the prominent leaders who spoke on the occasion and appealed for vote in support of BJP. 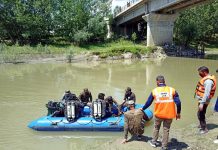