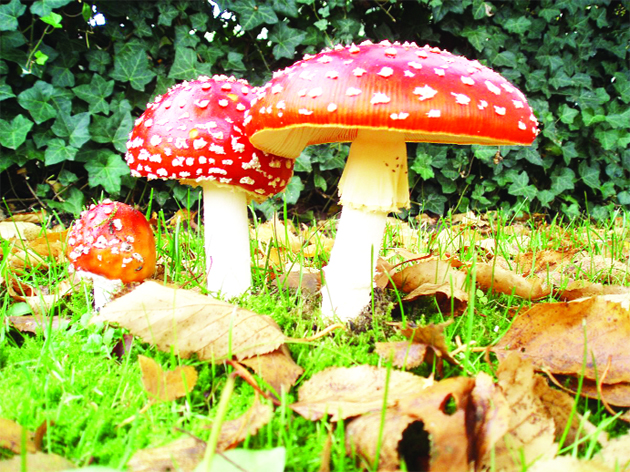 Prof. Yash Pal Sharma
Today let me expose you to the mesmerizing world of nature’s best multitasking engineers performing the crucial tasks of decomposition, nutrient cycling, and contributing silently and selflessly in nurturing plants and animals, and humans on the planet earth. Yes! these are ubiquitous and stylish- Fungi that we encounter every day!
Fungi are a Kingdom (Mycetae) of their own but are closer to animals than plants. These eukaryotic heterotrophs solubilize and digest their food from the diverse substrates by a biochemical machinery of enzymes. Fungi may be simple or complex microscopic (microfungi) including single-celled yeasts and moulds or large, macroscopic (mushrooms) visible to the unaided eye. With a phenomenal rate of reproduction through vegetative, asexual, and sexual mechanisms, fungi perpetuate, diversify and remain competitive in the challenging environmental niches occupied by other organisms as well. Intense genetic variability and biochemical composition confer endurance to fungi to thrive successfully in air, water, and land in the extremes of tropics to the temperate climate, cold and hot-arid deserts, frozen Antarctica, mountains, forests, and grasslands, as endophytes, in your own garden, in your house, in the food, etc. In fact, everywhere!
Fungal diversity is the second largest after insects. The recent estimate suggests the total number of fungal species existing globally between 2.2 and 3.8 million. Out of these, however, only a little above than 150,000 species have been described so far. Therefore, the vast majority of them are currently unknown. Earning a sobriquet of ‘Orphans of Rio’ from David Minter (as they did not find even their mention in CBD at Rio De Janeiro,1992), fungi seem to be continuously undermined in comparison to charismatic plants and amazing animals. While the majority of the fungi people best recognize are either a few edible mushrooms or yeasts, a lot of them with immense potential, remain obscure.
Understandably, for centuries, there existed a mycophobia (hatred for fungi) due to fungal inflicted diseases of plant and crop losses, deterioration of edible commodities, and famines that burdened the human race with humanitarian, economic, and environmental crisis of enormous magnitude. The classic examples of fungal inflicted sufferings include the Irish Potato famine (1845) and Bengal famine in India (1945), are a few of the many. Mycotoxicoses predominantly caused by the species of Aspergillus, Penicillium, and Fusarium, fungal mycoses (such as skin infections, mucormycosis, candidiasis, etc.), and mushroom poisonings witnessed across the globe as well as in India, were the other fungal-led malaises that caused unabated human sufferings.
However, with the advent of resources and technology our understanding improved and it was realized that fungi have enormous applications thereby setting a mycophilic (love for fungi) tone amongst the people. The unique attributes of fungi have heralded great promise for their application in biotechnology and industry. Yeast-based fermentation, bread making, alcoholic beverages, etc. were practiced by humans as long ago as 9,000 years ago. The discovery of the life-saving drug Penicillin by A. Fleming from Penicillium chrsyogenum proved to be a gamechanger during World War II, cephalosporins as immunosuppressants proved a boon for the increased rate of successful organ transplantation, cyclosporins, anti-cancer drugs like taxol, statins (Simvastatin), etc. brought a revolution in the pharmaceutical industry and presently the fungal-based medicinal drugs have a global trade of more than US $ 30 billion/yr. Fungal pre-and probiotics, and conversion of crop waste into bioethanol are much in vogue now.
By 2050, with an ever-growing population which is expected to reach 10 billion in another 30 years, our demand for food would grow by 70%. Fungi offer an alternative here! Presently, more than 400 fungal species including mushrooms are consumed as foods. ‘White biotechnology’ of cultivated mushrooms and their value-added products are already making hundreds of billion-dollars, annually. While as the mushroom-derived antioxidant tea and coffee are already available in organic stores, the vegetarian meat ‘Quorn’ of fungal origin is becoming popular in the European countries. Fermentation technology using elite yeast strains has already promised mass-producing egg whites without chickens. Another revolution in producing desired proteins, the vegetarian way!
On the environmental front and climate change, as an efficient regulator of carbon and nitrogen cycles due to their enzymatic ability to degrade cellulose and lignin, and mobilizing minerals, fungi are the best decomposers on the earth. And the good news is their capability of breaking down plastics in weeks rather than years. The cutting-edge technologies have made fungal-based dyes, cosmetics, bricks, and fabrics, etc. a commercial reality now. Fungal enzymes, PUFAs, and organic acids have already revolutionized the nutraceutical industry. On one hand, as biofertilizers and biocontrol agents contribute to enhanced crop production and eco-friendly integrated pest management, on the other, the health of the forests is accomplished through the vast underground ‘fungal internet’ called “wood wide web”.
Future Concerns
Exploring fungal diversity, its conservation and bioprospecting especially with the climate change is the need of the hour. Although Asian nations, including India, have taken a lead in capacity building and research in mycology, generous funding from the government and the global conservation organizations is ardently and urgently needed for more biotechnological interventions to tap the potential of the underexplored fungal resources for ushering in a ‘non-green revolution’ for food security and a safe environment.
Looking at the facts that the consumption of resources at present has surpassed their regeneration by nature, exploring sustainable alternatives for fulfilling human needs has become extremely crucial and indispensable. As a nature-based solution, fungal biotechnology surely is an answer for ensuring food security and assuring life on the planet. Mycologists in particular owe a responsibility in removing the ‘Fungal Blindness’ and move towards ‘Fungal Literacy’. Therefore, we all need to resolve that for health, healing and wellness we would admire, appreciate, and adopt fungi. Observing a National Fungus Day in India (occasionally we do celebrate a National Mushroom Day on 15th October) and nominating ‘National Fungus’ and ‘State Fungus’ to generate awareness about fungi amongst masses as has been done for plants and animals, is a good idea, I believe.
(The author is Coordinator, UGC-SAP & Principal Investigator, NMHS Project Department of Botany University of Jammu)