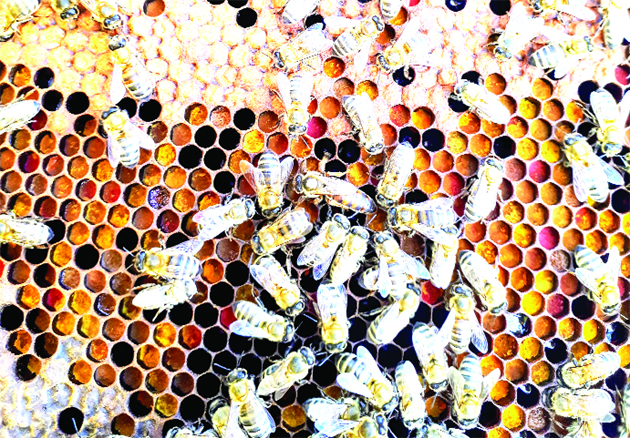 R.K.Gupta, Uma Shankar
Bhumbro Bhumbro shyam rang Bhumbro is a popular Bollywood song based on Bumblebees. Their decline is a matter of concern and perhaps the Kashmiri poet Dina Nath Nadim was aware of the fate of this minute creature and wrote:
The garden has whithered in autumn
It might be deserted soon
Oh bumblebee the black bumble bee!
Wherefore you are so sad and forlorn
Bumblebees are larger than honeybees, with short, stubby wings but they don’t produce as much honey However, they are very important pollinators. Without them, food wouldn’t grow. The buzzing sound they produce with their wings that beat 130 times or more per second, they are called buzz pollinators that helps plants produce more fruit. They are mostly widespread on temperate areas and perform better than honey bee in pollination as they visit more flower per minute. Besides, long tongue prefers flower with long corolla tube and also performs buzz pollination. Majority species prefer dark and undisturbed area for nesting and queen usually undergoes hibernation and starts colony in spring. A well-established colony contains approximately 400 bees depending on season of the year. Bumble bees are known for their constancy in flower visit and they leave scent mark after visit which deters them from revisiting until the scent degrades.
Bumblebees (Bombus spp.) are wild bees that are effective pollinators in subarctic and temperate zones but few species can also be noticed in hot areas. India is a home to 48 known species of bumblebees, out of which 27 species are present in Jammu and Kashmir. The other species are found in Easteren Himalayan states As per the collection made in the insect museum of SKUAST-Jammu, their diversity and numbers are declining to an alarming rates This is because since 2015, we were able to find only 13 species from sub temperate and temperate region of Jammu Himalayas . In another scientific report, the working group in the division of Entomology at SKUAST-Jammu reported a steep decline in numbers of commonly found species viz B. haemorrhoidalis, B. tunicatus and B. trifasciatus to an extent of 21.3, 42.1 and 44.6 per cent, repectively over the past ten years . While in term of species, B breviceps,Bombus pyrosom,B. asiaticus,B. simillimus,,B. melanurus and B. eximus are rarely observed on the coordinates surveyed over the past ten years. Their frequency of being encountered in previously surveyed areas has been reduced from 43.8 to 63.4 percent. This decline is attributed to mechanization in agriculture, loss of habitat, pesticide use and climate changes.
An important question is what is special about them. The answer is that they not only pollinate plants out in nature, helping to keep our ecosystems healthy, but they are also commercially valuable as pollinators of many crops. Managed bumble bee hives have become big business during the past two decades as agricultural demand for bumble bee-pollinated berries, peppers and tomatoes grown under green or protected houses. In developed nations, there are many companies that sell bumble bee box @ 150 Euros which is enough to cover between 1,000 and 10,000 square feet of plant area. However, future agriculture in developing nations depend upon their commercial availability.The aim of this article is to raise awareness of the plight of the bumblebees amongst the general public, as well as farmers, policymakers and other interested parties towards conservation. Entomological club at SKUAST-Jammu is involved in this motive as per Mr Nadim’s opera
We’ll strive to unite the narcissus with you
And she’ll be able to satiate her longing
Tell us how you feel,oh handsome black!
We’ll give our life to you
The club members are regularly advocating manipulation of agricultural practices and modification of landscape such as promoting wild flowers and creation of niches for their hibernation, survival and reproduction.We envisage a community outreach programme to reverse the decline of bumble bee diversity and population especially in the Jammu region. The conservation encompasses collaboration with partners and stakeholders that includes: research, advocating restoring of pollinator habitat, and to conduct outreach and education.for inclusive implementation. We have identified a hotspot (Nathatop forest and Meadow) for almost all kind of bumblebee species prevalent in the state. It harbours around 9 species of bumble bees B. haemorrhoidalis, B. tunicatus, B. trifasciatus, B breviceps, Bombus pyrosom, B. asiaticus, B. simillimus, B. melanurus and B. eximus . Our working group on bees and pollinators envisage to create this place (Natha Top) as conservation habitat for bumble bees . A large scale campaign for promoting bee walk and Api tourism is also planned. We urge the people across the section to know the bumblebees, show some love through photographic competition and to encourage students and stakeholders to become a member of the Bumblebee Conservation Network.