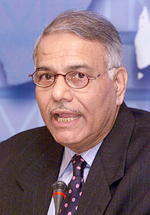 SRINAGAR: Former BJP leader Yashwant Sinha reached the Srinagar airport here on Tuesday but was not allowed to enter the city which is under communication clampdown and restrictions, and he had to return to Delhi by the last flight.

Sinha arrived at the Srinagar airport along with Air Marshal Kapil Kak (retd) and social activist Sushoba Bhave this afternoon.

Surprised on seeing Sinha deboarding a flight from Delhi, airport officials and the police immediately escorted him to the VIP lounge as there was no information about whether to allow him to enter the city. (AGENCIES)