E-Paper
Home Todays story Not a single bullet or tear gas fired, not a single... 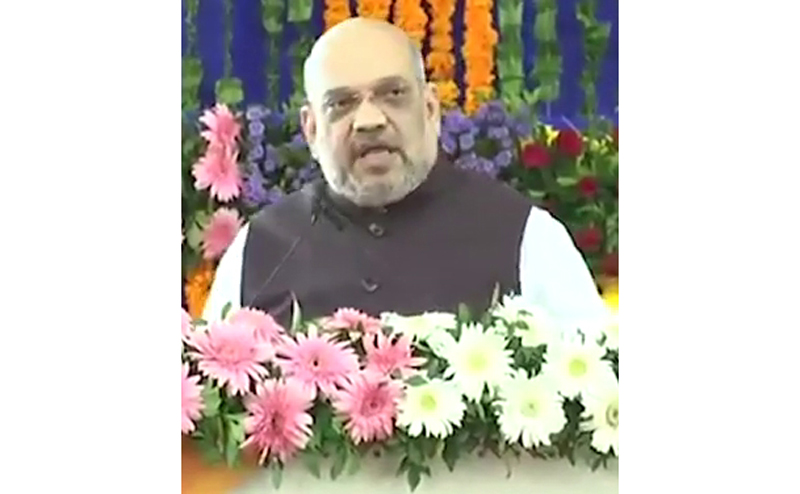 ‘Total peace in Kashmir’
Abrogation of 370 will lead to development

“Not a single bullet or tear gas has been fired and not a single person has died in Kashmir after abrogation of Article 370. Today, questions are being raised about the law and order of Kashmir. I would like to tell the entire country and the world that Kashmir is entirely peaceful,” he said.
Shah appealed to those opposing the abrogation of Article 370 to rise above politics and stand united with the Government in matters of national security and integrity.
Maintaining that under the leadership of Prime Minister Narendra Modi, abrogation of Articles 370 and 35-A has led to complete integration of Jammu and Kashmir with India, the Home Minister said this decision would lead to development in the region.
“This will also sound death knell for terrorism,” he said.
Shah said the revocation of the special status has paved the way for development in Jammu and Kashmir and it will be a “final nail in the coffin of terrorism”. “It has fully integrated Jammu and Kashmir with India”.
Coming down heavily on former Congress president and Lok Sabha MP Rahul Gandhi, Shah said the Congress should be ashamed that Rahul’s statement was used by Pakistan in its petition filed before the United Nations on Kashmir.
“While people have supported the Narendra Modi Government’s move to scrap Article 370 but some persons are still opposing it,” he said, taking a dig at Rahul Gandhi.
“The Congress opposed the move to remove Article 370. Whatever statements Rahul Gandhi make are lauded in Pakistan. Pakistan has included his comments in its plea. Congress leaders should be ashamed that these statements are being used against India,” he said.
Accusing the Congress of breaking the tradition of the Opposition supporting the Government on issues of national interests, the Home Minister said the BJP and its predecessor Bharatiya Jan Sangh, when in the opposition, supported Governments over issues of national interest like wars with Pakistan and China, and over resolutions declaring Jammu and Kashmir an integral part of India.
“It has been a tradition in the country. When the question is of national interest, we should rise above party-politics to think about the country. You (Congress) are breaking the tradition. You do not know that when you play vote-bank politics, people are assessing you on the same,” he said.
Instead, Shah said, the Congress is siding with people raising anti-India slogans in Jawaharlal Nehru University in Delhi as well as questioning the Modi Government over surgical strikes on Pakistan.
“When slogans were raised in JNU, the Congress stood with those people. When Narendra Modi (Government) conducted surgical strike, they raised questions seeking proof. Similarly, Pakistan raised questions asking where is the photograph?”, he said.
The Home Minister said when the Central Government removed Articles 370 and 35A, the Congress continues to oppose us. “I would like to ask Congress leaders, where do you want to do politics? You do not know the people of India, who stand like a rock behind Narendra Modi”.
He said the decision to scrap special Constitutional provisions of Jammu and Kashmir could only be taken by Prime Minister Narendra Modi and the move would pave the way for peace and development of Jammu and Kashmir.
“I can tell you, as his Minister, the decision taken by Modi Ji is something that nobody else could have taken. Many came and went in 70 years, ruled for three generations, but could not remove Article 370. People are blessing PM for this,” Shah said.