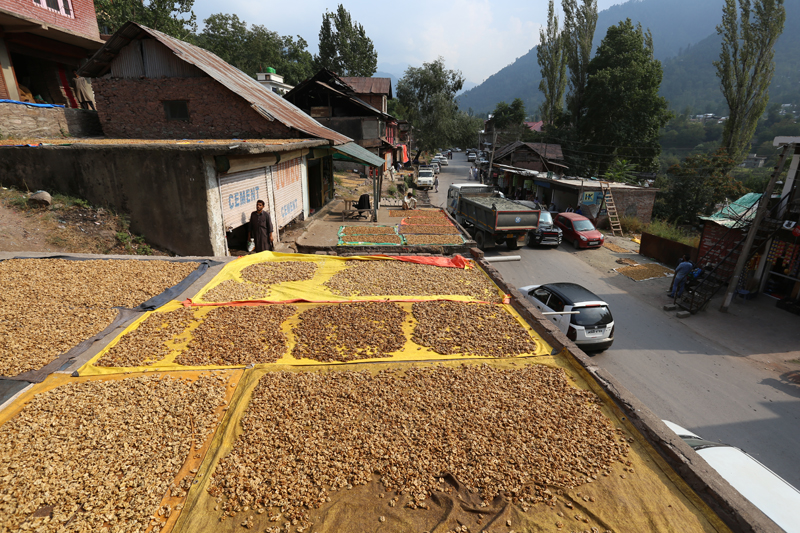 URI, Oct 11 : As lockdown continued in Kashmir, the situation has also affected the walnut business in the Valley, with the traders saying that they have witnessed a dip in the crop this year with added effects of the non-availability of transport and communication pushing the trade further on back foot.
Traders in Uri’s Lagama district said that unlike this year, their trade used to flourish as there always has been a demand for the Kashmiri walnut in rest of the country. However, this year, they don’t quite seem to be happy with their trade.
While the walnut trade is considered to be the back bone of the economy in Uri district, those associated with it are saying that this year they had to bear losses worth crores due to the situation that has arisen post August 5.
“There are hundreds of people who are associated with this trade in Uri itself; this is the only mandi in the Valley where the crop from the entire Valley reaches. From here, we either supply it outside J&K or the local traders come and buy it from us,” said Muhammad Shafi, a trader.
He however, said that this year, due to the non-availability of transport and the absence of telecommunication services, the traders had to undergo huge losses, while facing difficulties with regard to other things that are associated with their trade. “People from other district have not been able to send their produce here, plus, we have not been able to get in contact with our parties outside J&K—that has quite played a negative role with regard our trade,” he said.
Another trader named Muhammad Amin Chalkoo said that this year they have witnessed a decrease in the yield. “What we had this year is just 20 per cent of what we used to have; now, as the supply is less, there is more demand and we will be able to sell the produce on good rates,” he said.
Overall, the traders said that they can cope up with the less produce, but what renders them helpless are the means of forwarding the supply to the markets outside. Moreover, they said that in any trade, communication is a must which appears to be missing from the scene in the entire Valley.
“While we already had a less crop this year, but what is making our job tough is the absence of telecommunication,” said another trader, Ghulam Rasool Kakroo.
He along with all other traders said that they, so far, have not received any help from the district administration in terms of providing them with the facility of transport or the means of communication. “We have not seen one single person from the administration to this date, leave aside providing us with the facilities to further our trade,” Kakroo said.