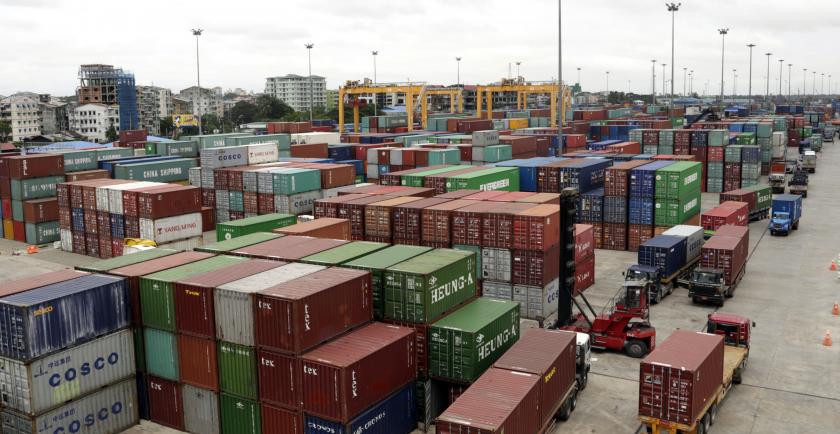 Mohinder Verma
JAMMU, Sept 25: No headway has been made on setting up of first ever Dry Port in Jammu and Kashmir even after finalization of all the modalities in this regard as the Dubai Ports Group has rejected the land identified by the State Government in Samba district. Due to this, attracting Rs 1500 crore Foreign Direct Investment (FDI) has remained a distant dream.
The construction of first-ever Dry Port in Jammu and Kashmir was announced by the then Finance Minister Dr Haseeb Drabu during presentation of general budget for 2018-19 financial year in the Legislative Assembly in order to attract Foreign Direct Investment and to boost local economy.
There has been long pending demand from the industry in Jammu and Kashmir for construction of Dry Port, which would go a long way in helping the industry in reducing transportation and other costs.
In the month of February this year, it was announced by the Government that first-ever Dry Port in J&K will come up in Samba district and the Government and Dubai Ports Group even inked a pact for a joint venture involving maiden Rs 1500 crore Foreign Direct Investment for setting up of inland logistic hubs in Jammu and Srinagar capital cities.
Even 100 acres of land in Samba district was identified by the Government through Jammu and Kashmir State Industrial Development Corporation (SIDCO) and it was stated that remaining 400 acres of land would be provided in due course of time.
“Thereafter, the Government made a formal request to the Dubai Ports Group to inspect the site and then set into motion the exercise for setting up of Dry Port”, official sources told EXCELSIOR. However, the team of the Dubai Ports Group found the land not feasible for the Dry Port on the ground that it is around four kilometres away from the Samba Railway Station.
“Since then there is no progress as the State Government has yet not identified any other land, which otherwise is the primary step towards setting up of first ever Dry Port in Jammu and Kashmir”, sources said, adding “even there is no further official communication from the Dubai Ports Group till date as a result of which attracting Rs 1500 Foreign Direct Investment has remained a distant dream”.
Despite being aware of the fact that finalization of site is the foremost step towards setting up of Dry Port, the Government in the month of February this year had even gone to the extent of stating that work on the project would start in the month of April this year and will be completed between 18 to 24 months.
“The Samba site has been rejected by Dubai Ports despite the fact that the then Finance Minister had categorically stated that all aspects were taken into consideration while identifying the land for Dry Port”, sources said.
When contacted, a senior officer of Industries and Commerce Department confirmed that site identified by the State Government has not been found suitable by the Dubai Ports and process to identify another land was going on, adding “hopefully, we will be able to resolve the issue shortly as Dry Port would be of immense help for the State”.
It is pertinent to mention here that a Dry Port also called an inland port or multimodal logistics centre, is an inland terminal connected to a seaport by rail or road. It serves as trans-shipment point in transport of export/import goods and is named so because it is very similar to a seaport in services it offer except that it is not near a sea.
Dubai Ports is operating 78 marine and inland terminals supported by over 50 related businesses in 40 countries across six continents with a significant presence in both high-growth and mature markets.
Highlighting importance of the Dry Port, sources said that the logistics hubs to be established in Jammu and Kashmir with maiden Foreign Direct Investment of around Rs 1,500 crore by Dubai Ports would include two dry ports, warehouses, cold storage chain, controlled atmospheric stores and supply chain to transport commodities and products including horticulture and agriculture produce, handicrafts and industrial products from the State directly to the markets throughout the world.
“One of the major problems of J&K economy is high cost of transportation of goods and products. With the setting up of Dry Port and the cold storage chain the commodities can move through an integrated transport chain. This will bring down the cost of transportation by 20 per cent to 25 per cent giving a major fillip to the state economy”, sources said.