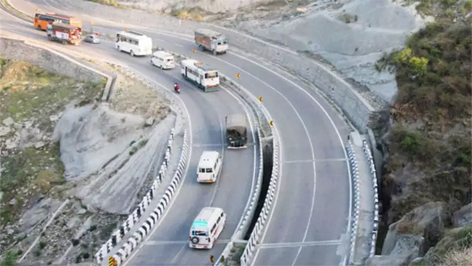 Excelsior Correspondent
JAMMU, Nov 16: The Jammu-Srinagar National Highway was reopened for traffic after third day this afternoon while all the stranded passenger vehicles have been cleared.
IGP Traffic, J&K Alok Kumar said that all the light motor vehicles stranded in Ramban and Banihal areas have been cleared after the highway blocked at Digdol was restored at around 3 pm today. He said nearly 600 trucks loaded with apples towards Jammu have been cleared by late this evening while movement of traffic was still on. IG said at Panthial also shooting stones created trouble during the day but at Digdole also, shooting stones have slowed down the movement of vehicles. The light rain was going on in the area and nobody knows when the highway will be blocked again, he said.
He added that over 6000 trucks laden with fruits were stranded in Qazigund area and they are being cleared for Jammu. Later, upward heavy traffic for Valley will be resumed.
Meanwhile, it rained during the day in Kashmir but weather showed some improvement in the evening. Director MeT Sonum Lotus said that weather will improve from tomorrow. He said there will be isolated shower over Kashmir in next 24 hours whereas, higher reaches will experience light snowfall.