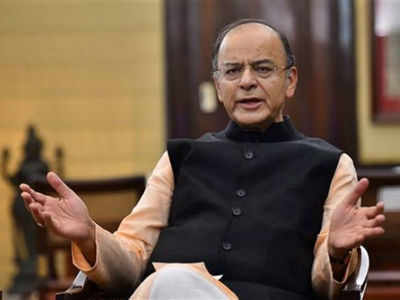 NEW DELHI, Mar 14:
Hitting back at the Congress, Finance Minister Arun Jaitley Thursday said first Prime Minister Jawaharlal Nehru was the “original sinner” who favoured China over India for permanent membership into the United Nation Security Council.
This comes within hours of Congress President Rahul Gandhi terming Prime Minister Narendra Modi as “weak” and “scared” of Chinese President Xi Jinping after Beijing blocked a UN resolution to designate JeM chief Masood Azhar a global terrorist.
“The original mistake, both on Kashmir and China, was committed by the same person,” said Jaitley while quoting a letter written by Nehru to Chief Ministers on August 2, 1955.
Jaitley, who heads the publicity committee of the BJP for the ensuing general elections, has quoted a part of the letter.
“Pt. Nehru’s infamous letter to Chief Ministers’ dated August 2, 1955, states ‘Informally, suggestions have been made by the United States that China should be taken into the United Nations but not in the Security Council, & that India should take her place in the Security Council.
“..We cannot, of course, accept this as it means falling out with China and it would be very unfair for a great country like China not to be in the Security Council,” he said in a series of tweets.
Taking a jibe at Rahul Gandhi, Jaitley asked, “Will the Congress President tell us who the original sinner was?”
India’s bid to designate the chief of Pakistan-based terror group Jaish-e-Mohammed as a global terrorist suffered a setback with China putting a technical hold on a proposal to ban him following the Pulwama terror attack.
The proposal to designate Azhar under the 1267 Al-Qaeda Sanctions Committee of the UNSC was moved by France, the UK and the US on February 27, days after a suicide bomber of the JeM killed 44 CRPF soldiers in Jammu and Kashmir’s Pulwama, leading to a flare-up in tensions between India and Pakistan. (PTI)