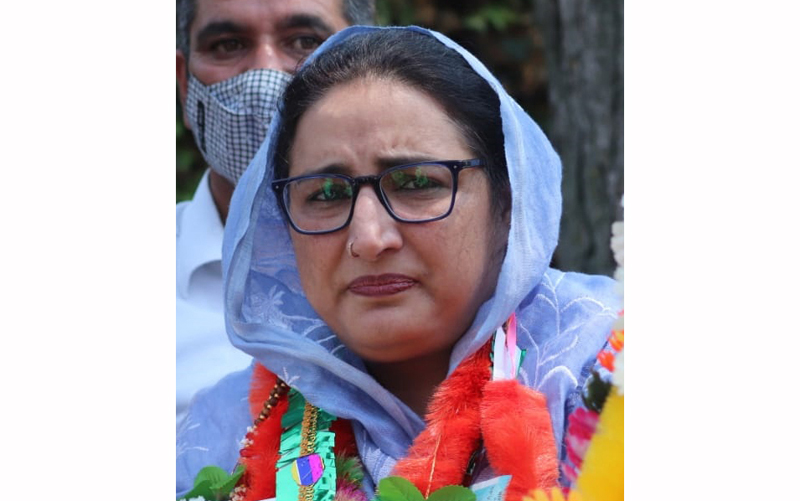 Srinagar, July 3: A National Conference (NC) Councillor was today elected as the Chairperson Municipal Council (MC) Sopore after she defeated her rival from the People’s Democratic Party (PDP).

Click here to watch video
Out of 18 votes of the Councillors, Masrat Nisar secured 12 votes while her opponent, Irfan Ali secured only 6 votes, paving a way for her to be elected as the Chairperson MC Sopore.
Notably, the post of the Chairperson was left vacant after a majority of the Councillors in January this year moved a no-confidence motion against the former Chairman of the MC Abdul Ahad Dar.
After the results of the elections were announced, Masrat while speaking to the media persons said that she is thankful to all those councillors who elected her and that her victory is the victory of the people of Sopore.
“The conduct of elections took time but finally, the elections were held and the wishes of people of Sopore were fulfilled,” she said.
She said that the opponents tried everything to defeat her, “but they failed and we emerged victorious,” she said, adding that she will work for the development of the Sopore town.
Parvaiz Sajad Ganai, Additional Deputy Commissioner, Sopore who was also acting as the presiding officer for the elections said that the notification for the elections was issued on June 24 and the candidates were asked to submit the nomination papers.
“There were 3 nomination papers for the Presidential post and Vice-President post respectively and at the time of withdrawal of the papers, one candidate who has filed the nomination papers for both the Presidential post as well as the VP withdrew the papers,” he said.
At the last, there were only candidates in the fray for the Presidential elections and those were Masrat Nisar and Irfan Ali, the ADC said.
For the Vice-President Post elections, there were two candidates in the fray and those include Mohammad Yousuf Razoo and Abdul Ahad
“The election was concluded in 2 hours and while Masrat Nisar was declared winner in the Presidential Post election by securing 12 votes and Mohammad Yousuf Razoo who secured 12 votes was declared winner in the Vice-President Post election,” the ADC said.
It is to be noted here that the election for 13 vacant wards of MC Sopore was held in December last year in which MC bagged 10 seats while 2 were won by independent candidates and one seat was won by a PDP candidate.