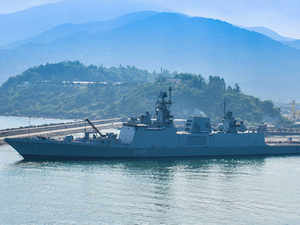 NEW DELHI: In a swift operation, the Indian Navy today rescued 38 Indians from Socotra island in Yemen where they were stranded for nearly 10 days after a severe cyclonic storm hit the area.

The Navy yesterday had diverted its ship INS Sunayna from the Gulf of Aden to Socotra as part of the operation ‘NISTAR’ to rescue the Indians, Navy spokesperson Captain D K Sharma said.

He said the stranded Indians were rescued off the coast of Socotra early this morning and are now onboard INS Sunayna, adding all of them were safe. The ship is bringing the Indians back home.

“The operation, code-named ‘NISTAR’, was carried out on the morning of June 3 off the coast of Socotra. The evacuated Indians were embarked on board and immediately provided with medical care, food, water and telephone facilities to call and reassure their families at home,” Sharma said.

He said the ship is proceeding towards Porbandar in Gujarat. (AGENCIES)