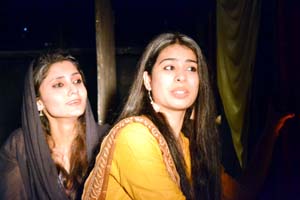 JAMMU, Apr 29: This Sunday, Natrang presented a poignant play “Do Harf Adhure Se” in its Sunday Theatre Series.
The play has been written by Devinder Goswami and directed by Neeraj Kant. Set in the decade of nineties, the play was full of memories, emotions, confessions, allegations, questions and nostalgia.
In the play, ‘Nikhat’ and ‘Shabnam’ two best friends, meet after many years. Shabnam finds Nikhat after reading her most famous novel for which she had also been awarded. The long lost friends become super happy after seeing each other that brings back their old immortal memories they have shared with each other.
Both the friends laugh and abuse each other in fun which shows they shared a very special bond. Shabnam points out the novel and the award that disappoints Nikhat making her feel that Shabnam is here only because of the novel and the award and not to truly meet her.
Shabnam is curious to know about Nikhat’s storyline and whether it is the autobiography of her own story which was presented in the novel. Shabnam’s suspicion about the same turns out to be true and the reunion of the two replace into confessions, argument and fight. They realize that they were too selfish in their youth that lead them to take wrong decisions.
The two best friends were in love with the same man ‘Javed’. Nikhat and Javed loved each other a lot. An accident made Nikhat physically disabled that lead to breakup of the two. Javed then married Shabnam. Shabnam is now separated from Javed and was actually here to know about him after she read about him in the novel.
Nikhat confesses that he is dead and had come to meet her before his death. Shabman cries in pain but a phone call tells that Javed is alive and was the same driver who dropped Shabnam and he is coming to Nikhat’s place.
The play left the audiences emotional after watching the relationship of two best friends who loved the same man and yet met and shared a selfless bond confessing everything.
The actors who performed in the play were Vrinda Sharma and Meenakshi Bhagat. Lights and sets were designed by Shivam Singh while music was operated by Gautam Kumar. The show was coordinated by Aishwarya Sathe.