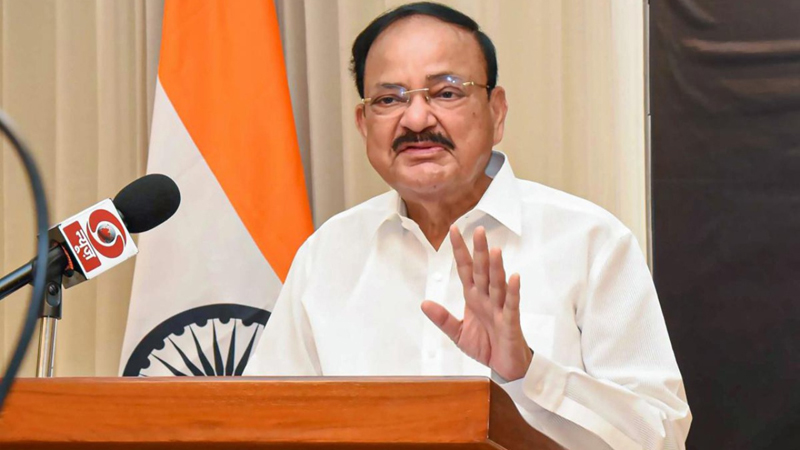 HYDERABAD, July 31:
Vice President M Venkaiah Naidu on Saturday called for innovative and collaborative efforts to protect and rejuvenate Indian languages.
Noting that preserving languages and ensuring their continuity is possible only through a peoples movement, he said people must come together and pool in efforts to pass on the heritage of language to future generations.
Naidu, who was virtually addressing a conference organised by Telugu Kootami on the protection of mother tongues, touched upon various people-driven initiatives needed to preserve the Indian languages.
Highlighting the important role translation plays in enriching a language, he called for increased efforts in improving the quality and quantity of translations in Indian languages.
He also suggested making ancient literature more accessible and relatable to the youth in plain and spoken language.
The Vice President recommended compiling endangered and archaic words in a language from rural areas and various dialects in order to preserve them for posterity.
He cautioned that one’s self-identity and self-esteem will eventually be lost if one’s mother tongue is lost.
It would be possible to preserve various aspects of our heritage – music, dance, drama, customs, festivals, traditional knowledge – only by preserving our mother tongue, he said.
On the occasion, he lauded the recent initiative of Chief Justice of India NV Ramana, who resolved a 21-year-old marital dispute in an amicable way, by allowing the woman to voice her concerns in her mother tongue, Telugu, when she expressed her difficulty to fluently speak in English.
Naidu said the case underlines the need for the judicial system to allow people to express their problems in their native languages in courts and also deliver judgments in regional languages.
The Vice Presidentreiterated the importance of imparting education in the mother tongue up to primary school level and according priority to the mother tongue in the administration.
He lauded the Centre for bringing out a visionary National Education Policy (NEP) which lays emphasis on the use of mother tongue in the education system.
A holistic education, as NEP envisions, is only possible when culture, language and traditions are integrated into the education system, he pointed out.
Appreciating the recent decision of 14 engineering colleges in eight states to offer courses in various Indian languages from the new academic year, he favoured gradual increase in the use of Indian languages in technical courses.
Referring to various best practices in the world in preserving mother tongue, the Vice President called upon language enthusiasts, linguists, teachers, parents and the media to take insights from such countries.
He said countrieslike France, Germany and Japan, while using their native tongue in various advanced disciplines like engineering, medicine and law, have proved themselves strong vis-a-vis English-speaking countries in every field.
Naidu also sought improving scientific and technical terminology in Indian languages in order to facilitate their wider reach.
Asserting that according importance to mother tongue did not imply the neglect of other languages, he called for encouraging children to learn as many languages as possible, beginning with a strong foundation in ones own mother tongue. (PTI)