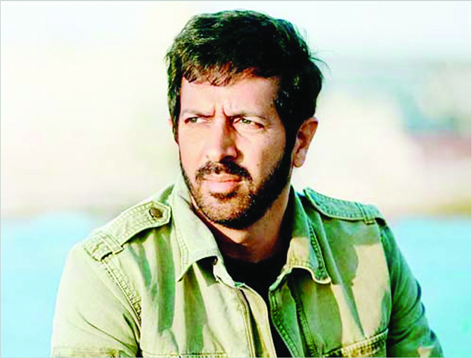 Calling himself an optimist who believes in the goodness of people, director Kabir Khan says everything these days is being looked at through the prism of religion but India is about more than that.
The director of blockbusters such as “Bajrangi Bhaijaan” and “Ek Tha Tiger” said he is happy he has a platform as a filmmaker to present a counterpoint to the prevailing narrative based on religious fault lines.
“I’m an optimist who believes in the goodness of the people. But yes, there is a certain level of bigotry that has crept in. Everything is being looked at through the prism of religion but India is not about that.
“It sounds like a cliché but when I was growing up, I was not aware of my religion. That was the greatness of this country,” Kabir said. He said he is a product of a mixed marriage and is pained to see the social fabric being tattered. “I have celebrated the best that Indian secularism has to offer. But to see the greatness of this country being simplified and broken down into religious fault lines is a painful experience,” he added. According to Kabir, it is dangerous to see history through the prism of religion, whether in cinema or society. But it is important to revisit history to know what happened and one can always find something that is relevant for the present, he said.
The director, who started as a documentary filmmaker, returns to his roots for a five-episode series on Subhas Chandra Bose’s Indian National Army, “The Forgotten Army: Azaadi Ke Liye”, on Amazon Prime, his most expensive project yet. Asked whether this is a difficult time for filmmakers, Kabir said he believes art thrives in the time of strife and, as a storyteller, his politics will always reflect in his work. “Every film has its politics and every filmmaker has to reflect his or her politics. Every film of mine will reflect my politics and it will never change according to the popular mood of the audience. But a film should not be just about that. Politics should be in the layers beneath,” he said.
His terms his 2015 Salman Khan-starrer “Bajrangi Bhaijaan” an “extremely political” film. At face value, it can also be enjoyed as the story of a mute Pakistani girl who drifts into India and is taken back to her homeland by a Hanuman devotee. But there is so much more. The “chicken song”, for instance, was a sly reference to the beef ban controversy at the time, he said. “I won’t say it is a difficult time for me as a filmmaker. It is good that I have a platform where I can talk and present a counterpoint and I refuse to believe that the entire country believes the narrative that is being sent out. There are millions and millions of people, and perhaps majority, that does not believe. And if I present the counterpoint, they will think about it.”
Discussing his new series, the director said it has always fascinated him that the sacrifice of the men and women who comprised the INA is just a forgotten footnote in history. “I wanted to make something that stands the test of time. It goes down in posterity,” Khan, who first explored the subject in a Doordarshan documentary 20 years ago, said. For the documentary, he travelled with former INA officers Captain Lakshmi Sahgal and Captain Gurbaksh Singh Dhillon from Singapore to India via erstwhile Burma, retracing the route that the INA followed. “The documentary got me a lot of attention and acclaim but the story just never left me. It’s actually the first script I ever wrote and I landed up with that script in Bombay from Delhi. I realised very soon that nobody’s going to give me a budget of this size to make my first film.
“And then after every film, I would pick up the script and say, ‘Okay, this is the one I want to make’, because this is the story that made me want to become a filmmaker. On the way, I ended up making eight other films but this is really the story that I wanted to make,” he said. Kabir is happy that the story has come out as a series, not a film, as it would have required to compromise with the budget and other elements.
“Without giving any numbers, this is the most expensive project I have ever worked on… It required that kind of budget.”
Kabir believes the INA was responsible for bringing down the morale of the British establishment, which realised it would be impossible to keep the country colonised without the support of the local army.
“There are a lot of debates and discussions about what happened with the INA and the controversies around it. The whole point is that, if you want to judge what the Army did, sure that’s your prerogative, but at least get to know what they did. Nobody knows what happened with the Army from 1942 to 1945.” He added that 55,000 men and women of the INA fought for independence and 47,000 of them died. “Not a single person from that Army was ever taken back into the independent Army, which is such an amazing fact… The fact that the British called them traitors became the narrative and we also started assuming that they were traitors.” “They were the only women’s regiment in the whole world 70 years ago. That’s what they thought about women’s importance in society. I don’t know whether they will be happy with what the current situation is,” he said.