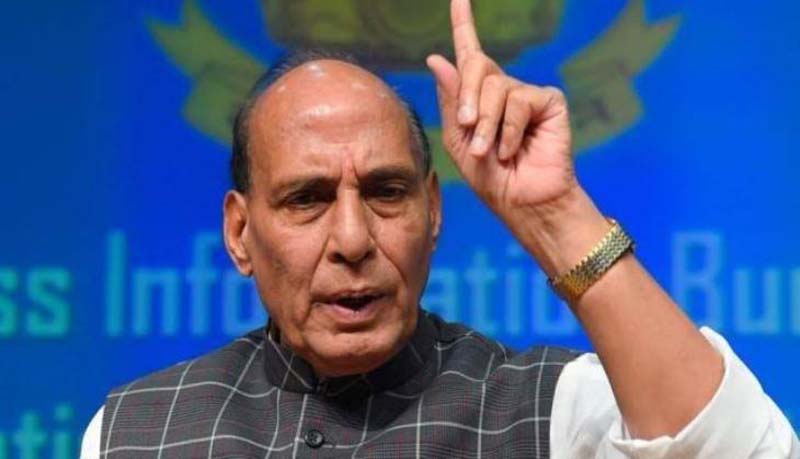 *Calls for alert against terror threats

JAMMU, Dec 7: Defence Minister Rajnath Singh today said the Central Government has adopted ‘multi-pronged strategy’ to bravely fight the terrorism which has yielded positive results and charged the hostile neighbour (Pakistan) with not giving up ‘nefarious designs’ and continued to pursue terrorism as its ‘State policy’.
Addressing Passing Out Parade of the Indian Military Academy (IMA) at Dehradun, he said the entire world knows that the militants of Lashkar-e-Toiba (LeT), who had executed 26/11 terror attacks in Mumbai, are still sitting in Pakistan.
In a series of tweets after his address at the Passing Out Parade, Rajnath told the fresh recruits that they will have to keep themselves always ready for facing challenges of terrorism bravely.
“Our Government has adopted ‘multi-pronged strategy’ against the terrorism which has yielded positive results. On western front one of our hostile neighbours, Pakistan, has adopted terrorism as the ‘State policy’. In direct wars, Pakistan has lost four times but this strange neighbour is still not giving up its unhealthy practices,’’ the Defence Minister said.
Stressing the need for remaining always alert against the dangers of terrorism, he said besides following terrorism as State policy, several non-State actors have become such powerful in that country that the State actors have been reduced to mere puppets.
“Entire world knows that perpetrators of 9/11 terrorist outfit Al-Qaeda’s supremo was found in Pakistan. The world also knows that executors of 26/11 terror attacks in Mumbai affiliated with Lashkar-e-Toiba militant outfit are still sitting in Pakistan,’’ Rajnath said.
He added that 166 persons who lost their lives in 26/11 terror attacks and their relatives will get justice the day the accused, who executed the attacks, are taken to logical conclusions.
Rajnath said India has no extra-territorial ambitions but asked the armed forces to be alert against Pakistan.
“History bears evidence to the fact that India does not have extra-territorial ambitions. It believes in friendly relations with its neighbours. But we have to be ready to deal with a neighbour like Pakistan,” he said.
The Defence Minister said territorial perceptions of India and China might be different from each other but China stands with the rest of the world in the fight against terrorism.
He also praised the Indian security forces for displaying great willpower as well as restraint during the Doklam crisis with the Chinese.
He said: “We have perceptional differences with that country as the boundaries with it haven’t been clearly demarcated and the issue is pending. In view of this, the Army jawans along Northern Front and North Eastern Front along with bravery will also have to use wisdom’’.
He added that whenever the need arises, the Army has used wisdom and avoided confrontation. In this regard, he cited the issue of Doklam where the Army displayed fine example of willpower.
“I can confidently say that the future of Indian Army’s leadership is in safe hands,’’ Rajnath said.
PTI adds: Singh asked the cadets commissioned into the armed forces today to take the message of service and peace to the world but be prepared to deal with a neighbour like Pakistan.
He asked the new IMA passouts to hone the skills learnt at the academy so that they are ready to grapple with the relatively new challenge of cyber terror.
Congratulating the cadets on being commissioned into the armed forces, he said, “Your training has not just given you strength but also a new meaning to your life” also saluted their parents.
The Defence Minister, who inspected a colourful drill presented by the passing-out cadets in the backdrop of the historic Chetwode building, also announced the construction of two underpasses connecting the North, South and Central campuses of the IMA to decongest traffic in the area.
The two underpasses will also make travelling to the neighbouring Himachal Pradesh and Haryana from Dehradun extremely convenient. Singh said over Rs 30 crore has been sanctioned for the projects.
A total of 377 gentlemen cadets, including 71 cadets from 10 friendly foreign countries, were commissioned into the armed forces of their respective countries.
Uttar Pradesh had the highest representation with 56 trained gentlemen cadets followed by Haryana with 39 and Bihar with 24.
The Sword of Honour, the most coveted recognition at the academy, and the Gold Medal was given by the Defence Minister to Academy Under Officer Vinay Vilas Garad, the Silver Medal to Senior Under Officer Peekendra Singh and the Bronze Medal to Battalion Under Officer Dhruv Mehla.