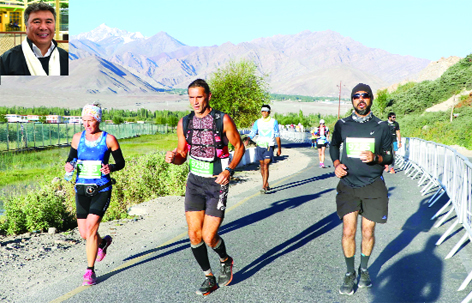 Morup Stanzin
Tsewang Motup Goba had no idea that his mountain exploits would fetch him a Padam Shree Award till the time he received a call from the concerned quarters.
He profusely thanked the Government of India for recognising his contribution by awarding him Padam Shree.
His tryst with mountaineering began when he was studying in Tyndale Biscoe School in Srinagar where outdoor activities here an important component of school syllabus.
He was fortunate to get a chance to climb Mountain Hermukh in Kashmir in June 1979 without any equipments following which his school Principal sent him to Nehru Institute of Mountaineering in Uttarkashi for Adventure course in 1980. As a result, his interest in studies faded and passion for Mountains grew. Climber Herman Buhl who conquered the Nanga Prabat solo in 1953 became his role model and tried to do what he did during school timing.
When peace talks between India and Pakistan were organized, he was the main speaker on Siachen Glacier as very few civilian had been to the Siachen. He got a chance to visit Siachen twice in 1986 and 2002 with some expedition. He added that Siachen is the Thermostat for both India and Pakistan and is the main source of Indus water.
Talking about Ladakh Marathon journey, Motup said that Denmark Company started The Great Tibetan Marathon in Ladakh and he was little upset as he wanted to start such Marathon in Ladakh to provide a chance to local runners but the said Marathon done on commercial basis collapsed due to non involvement of locals. So soon after Cloud Burst in Leh in 2010, he thought that It was the best time to the tell the world that Ladakh is back on track and we are running, so in order to provide a chance to locals who have natural god gifted immense stamina, decided to start Ladakh Marathon in 2012. Now, Ladakh Marathon is recognized by Association of International Marathon and Distance Races’ (AIMS). Marathon 2019 with nearly 6000 participants was eco friendly event with not a single use of plastics during the two days events. The 9th edition of Ladakh Marathon scheduled for Sunday 13th September 2020 is now a qualifying race of Series XIII of the Abbott World Marathon Majors Wanda Age Group World Rankings.
Motup has been working in the Adventure Tourism for 40 years. His travel company RIMO Expedition is the one who started Chader Trek in Ladakh commercially and now Chader Trek is one of the popular adventure treks during winters. RIMO is the only travel company in India which organizes expedition to Mount Everest. RIMO has organized 30 expeditions in Karakoram Mountain out of the total 40 expeditions till date. Most of the trekking routes and valleys in Nubra were explored by RIMO expeditions. RIMO expedition had its own Ice Hockey team in Ladakh but in 2012 he disbanded his team and donated 50 sets of Ice Hockey equipments to Ladakh Winter Sport Club and he was pioneer in Ice Hockey Game in Ladakh.
Motup was elected as President at Himalaya Club which was founded in 1928, one of the oldest Mountain Club in India. He is a member at Alpine Club UK, oldest Mountaineering Club and Alpine Club America. He is also honorary member at Yorkshire Ramblers Club. He fetched number of awards including best Adventure Tour Operator Awards, National Wildlife service award in 2014 for sustainable tourism.