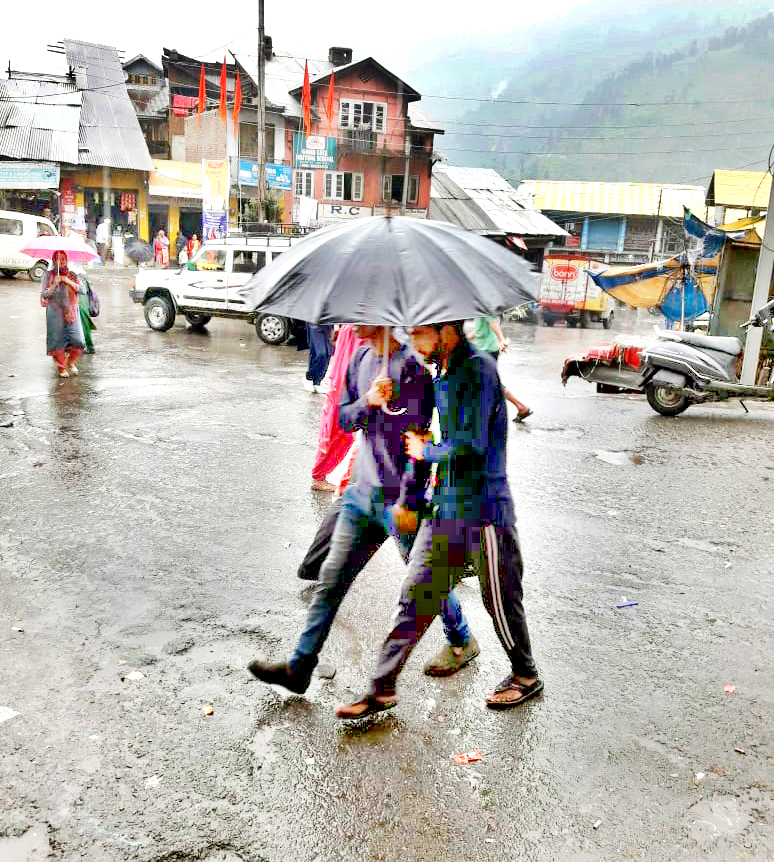 Gopal Sharma
JAMMU, June 28: Monsoon arrived in the State a week ahead of its schedule as intermittent light rain lashed several parts of the region since last evening bringing Jammu’s temperature about 10 degree Celsius below normal, providing great relief to the people facing scorching heat wave in the region.
The Jammuites woke up in the morning to a pleasant weather condition after scattered light rains lashed the City of Temples as Monsoon hit the State last evening.
Director Meteorological Department Sonam Lotus said that monsoon reached J&K last evening, making its entry to the State a week ahead of its schedule. He said it is raining continuously since last evening in the State and it will continue tomorrow as well. Bhaderwah and Doda areas have experienced heavy rain since last night. He said with the arrival of monsoon, the people of Jammu region got big relief from the scorching heat.
Meanwhile, a MeT office spokesman said that the day temperature in  Jammu city fell by five notches during past 24 hours to settle at 28.0 degrees Celsius, which is about 10 degrees below, normal for this part of the season.
He said the night temperature also recorded a dip of about four notches and it settled at 23.9 degrees Celsius, 2.5 notches below average.
The official said the drop in the mercury was the result of early arrival of Monsoon which hit the State late last evening.
He said normally, monsoon arrives in the State during the first week of July. He added that the intermittent rains will continue for the next couple of days. He said normal rains are expected during the Monsoon season which usually remains active till mid of September.
The spokesman disclosed that Bhadarwah township of Doda district in Jammu region recorded the highest 56.2 mm rainfall since last evening, while the Jammu city witnessed 2.4 mm of rains till 05.30 pm today.
He further disclosed that Bhaderwah town recorded a maximum tempretaure of 17.4 degree Celsius and minimum 14.1 degree C, holy township of Katra maximum 24.7 degree C and minimum 21.2 degree C while Batote maximum 16.8 degree C and minimum 14. 2 degree Celsius temperature.
The rain also affected road traffic on Jammu -Srinagar National Highway for about two hours, after land slides amidst rain caused blockade at Digdol. The highway was, however, cleared before the arrival of  Shri Amarnath Yatra at Ramban, a senior Traffic Police official said.
He  said though it was raining in Ramban, Doda and Kishtwar areas this evening, but the roads were clear till late this evening.