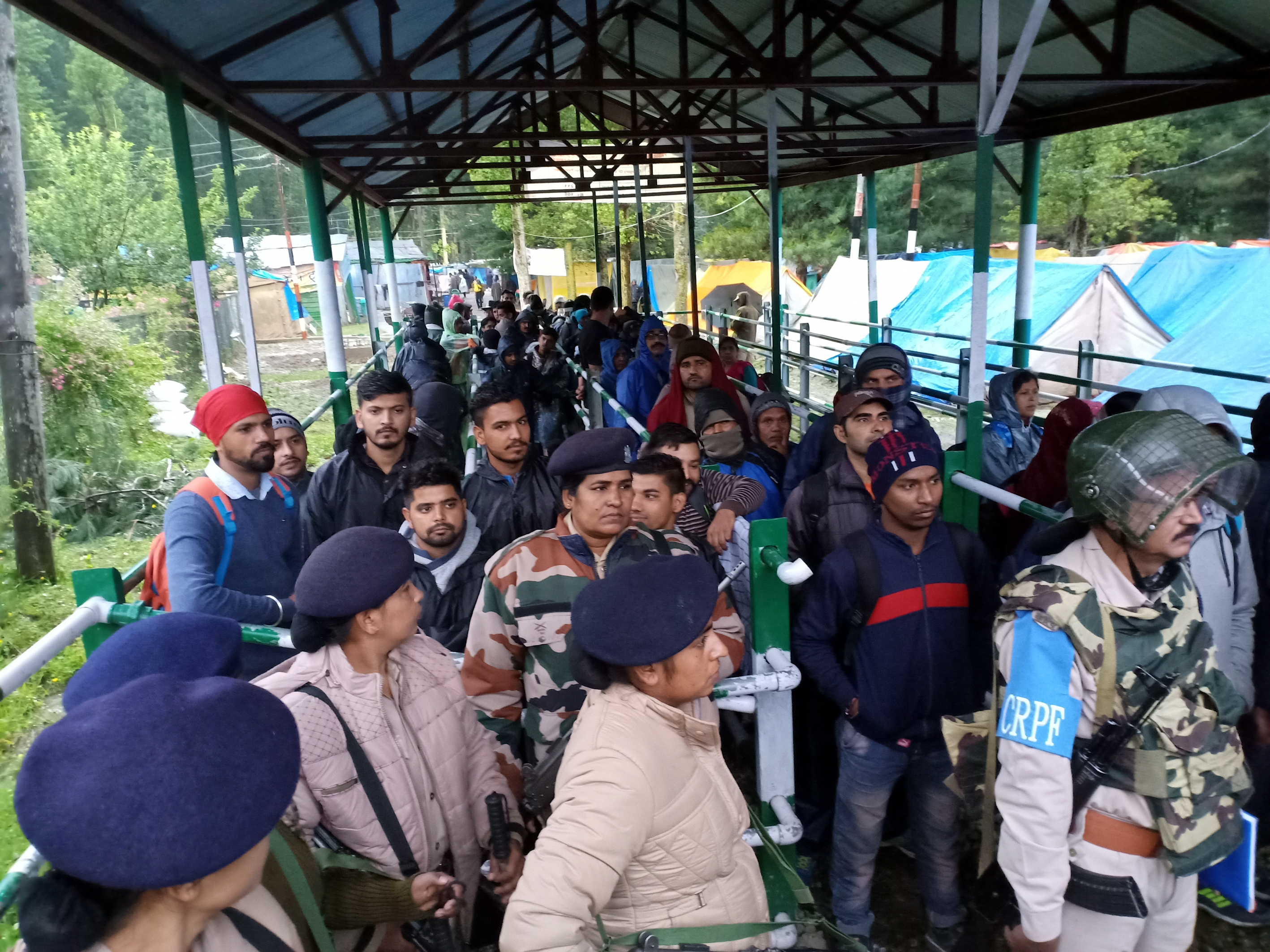 Yatra suspended on both tracks

Excelsior Correspondent
JAMMU, June 28: As yatra was suspended from both Baltal and Pahalgam tracks to the holy cave of Swami Amarnath, due to inclement weather and heavy rainfall, still 1007 pilgrims managed to pay obeisance at cave shrine on the first day of darshan today.
The yatra was delayed due to heavy rainfall on both the tracks since last night up to this afternoon. Only 1316 pilgrims managed to leave for holy cave from Baltal base camp and 60 from Nunwan Pahalgam base camp, official sources said.
According to sources, over 2000 pilgrims each were stranded at Pahalgam as well as Baltal.

Click here to watch video
Due to inclement weather some yatris were halted in the transit camps at Qazigund and Mirbazar, Deputy Commissioner, Anantnag, Mohammed Younis Malik, who is also the Yatra Officer told Excelsior. He said all arrangements for camping of the pilgrims have been made in transit camps and he himself was monitoring them to ensure that pilgrims are not put to any problem.
He said the yatra was suspended due to heavy rainfall and the Pahalgam track being a 32 km lengthy route so the authorities don’t want to take any risk by allowing pilgrims to proceed ahead on slippery track.
He said, however, there was an improvement in the weather and yatris will be allowed for darshan of holy cave early morning tomorrow.
Meanwhile, the second batch of 3,434 pilgrims, including 592 women and 160 Sadhus, today left from here for the base camps in the Kashmir valley to undertake the arduous yatra to the 3,880-metre high cave shrine of Amarnath.
The 60-day annual pilgrimage was scheduled to start from the twin routes of Pahalgam in Anantnag district and Baltal in Ganderbal district this morning but got delayed due to heavy rains.
Wide parts of Jammu and Kashmir were lashed by light to heavy rains since last evening, also triggering a landslide on Jammu-Srinagar National Highway near Peera. However, timely action by the concerned authorities made the road traffic worthy.
After getting road clearance, the second batch of 3,434 pilgrims left Bhagwati Nagar base camp here for Kashmir in the early hours, officials said. However, due to inclement weather and avoiding rush at base camps of Nunwan and Baltal some pilgrims were halted at transit camps of Qazigund and Mirbazar in Kulgam district today, sources said.
Sources said while 2,638 pilgrims, including 449 women, two children and 160 Sadhus, opted for the traditional 36-km Pahalgam route, 796 pilgrims, including 143 women and a child, chose the 12-km shortest Baltal route.
The pilgrims left Jammu in a fleet of 114 heavy and light motor vehicles under tight security arrangements, taking the number of pilgrims who left for the Valley from the base camp here since yesterday to 6,429.
Over two lakh pilgrims have so far registered for the yatra which is scheduled to conclude on August 26 coinciding with the Shravan Purnima and ‘Raksha Bandhan’ festivals.
Meanwhile, hundreds of pilgrims are entering the Jammu daily via road and rail transport to embark on the annual Amarnath pilgrimage. Hundreds of yatris were seen camping at gate way of Lakhanpur today. As per reports 1908 pilgrims crossed Lakhanpur check post to Jammu since this morning.
Free langars have been organised by various philanthropist organisations at different parts enroute from Lakhanpur to holy cave. The authorities have also booked the community halls and lodges for the pilgrims in Jammu and other towns enroute to holy cave.
Hundreds of yatris have reported at Bhagwati Nagar Yatri Niwas by this evening for their further journey to holy cave tomorrow. According to Deputy Commissioner, Jammu, Rajiv Ranjan, the yatra will proceed for holy cave from here tomorrow as usual.