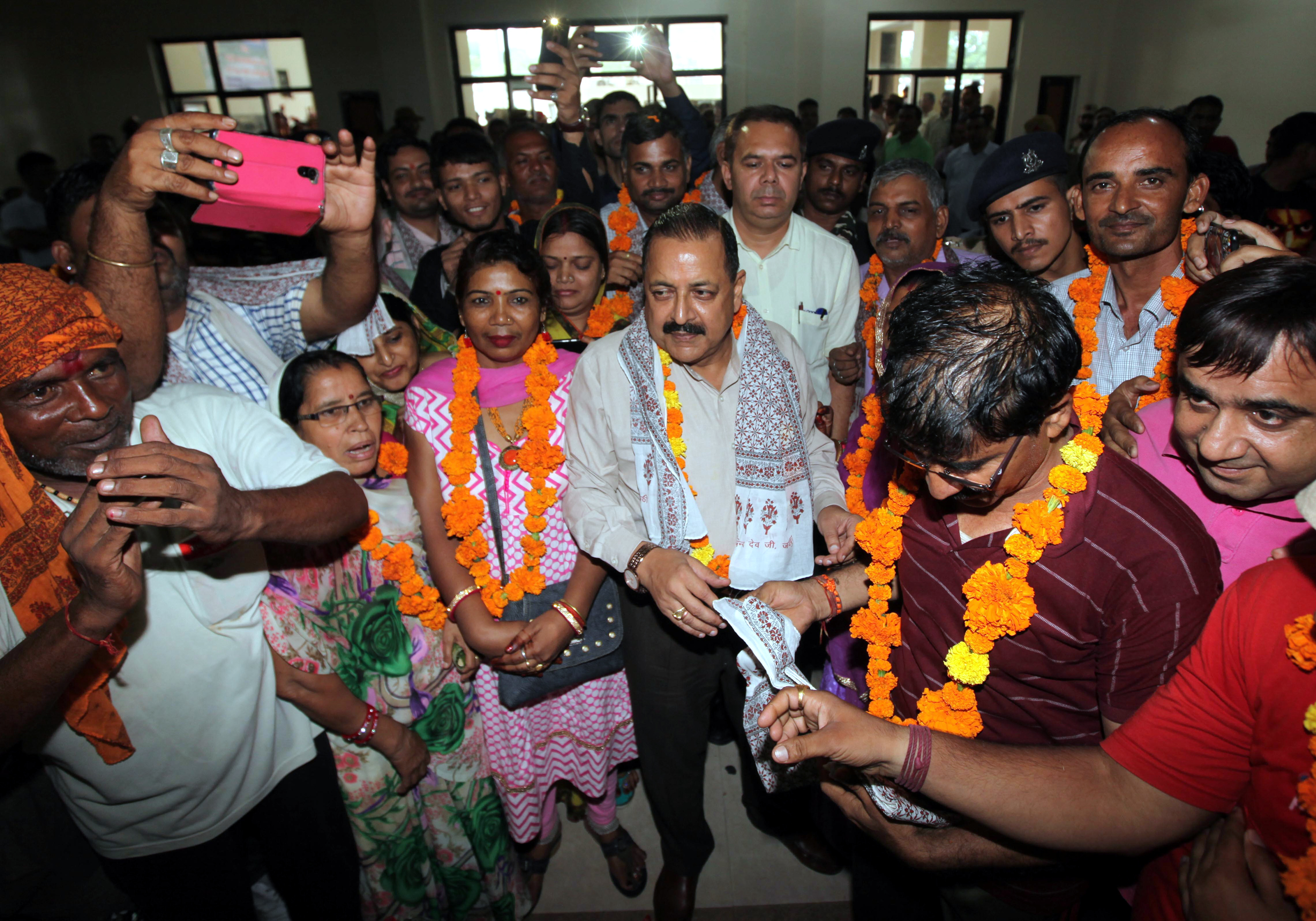 Avtar Bhat
KATHUA, June 28: While making a scathing attack on Pakistan, Union Minister of State in PMO with Independent charge of North Eastern States, Dr Jitendra Singh held the neighboring country  responsible for all the disturbances in the Kashmir valley.
“The disturbances in Kashmir are sponsored and funded by hostile neighboring country and it has been behind all the trouble in Valley”, Dr Jitendra Singh told reporters on the sidelines of an interactive function with Amarnath yatris at Lakhanpur, the gateway of J&K near here, today.

Click here to watch video
The Union Minister said whenever the normalcy returns to Valley and saner elements emerge to rid the people of the three decade old strife, the attempts are made to liquidate them.
He said, however, the youth of the Valley want to become the part of Prime Minister Narendra Modi’s development programme and don’t want to lag behind their counterparts in other parts of the country and that is the reason that they have emerged with flying colours during past some years in competitive examinations held by UPSC or other competitive bodies.
Lambasting the leaders of Congress party while responding to certain charges made by some of its  leaders, Dr Jitendra Singh said , it is for the people of this country to judge whether it is safe to trust a party like Congress as a claimant to rule the country, particularly after recent indications that Congress and Laskhar-e-Toiba (LeT) are on the same page.
Taking some opposition parties including Congress to task for seeking proof on surgical strikes made by Indian Army , Dr Jitendra Singh said that it is a sin to doubt Indian Army’s professional integrity and that there can be no greater sacrilege than to question the commitment, devotion and valor of the Indian Army.
Dr Jitendra Singh said, “personally I believe it is not even required of the Army to offer a proof for their operations, but now that the proof has been graciously provided, this should put an end to the issue, with a pledge not to ever let such a situation arise again in future.” He said, the nation is internally indebted to the sacrifices by the Indian Army.
Earlier, soon after his arrival here, Dr Jitendra Singh interacted with the Amarnath pilgrims and inquired about their requirements. He reviewed the arrangements made by the administration and, considering the heavy rainfall today, he also arranged the distribution of umbrellas and caps among the pilgrims.
He also welcomed the pilgrims entering the State and informed them that the State and Central Governments has made adequate arrangements to make their yatra safe and comfortable.
He said there can be no impediments in the yatra with the blessings of Lord. “The Amarnath yatra does not belong to a particular religion and it is duty of all to make this yatra successful. “This yatra reflects the secular traditions of this  nation as well as Ganga Jamini civilization”, he added.
The Union Minister assured that there will be no compromise on the yatra and its security which is the prime duty of the Government.
He expressed the hope that the yatris from all over world and across the country will visit this year to spread the message of peace and brotherhood.
Later the Union Minister inaugurated the K V at Janglote Kathua.
Lauding the performance of Government schools, particularly that of Kendriya Vidyalayas and Navodaya Vidyalayas, Dr Jitendra Singh said, gone are the days when children from private schools were said to enjoy an advantage in competitive exams. In the last few years, he said, most of the toppers in the Civil Services / IAS exams are from Government schools or Kendriya Vidyalayas. He congratulated the people of Kathua for the new facility of this additional Kendriya Vidyalaya for the area.
Deputy Commissioner Rohit Khajuria, SSP Shridhar Patil, ADC, ACR, SP Traffic Rural, DC Excise Toll Post Lakhanpur, DC KVS Jammu Region, AC KVS Jammu Region, Principals, Engineers and other district officers were present at the function.