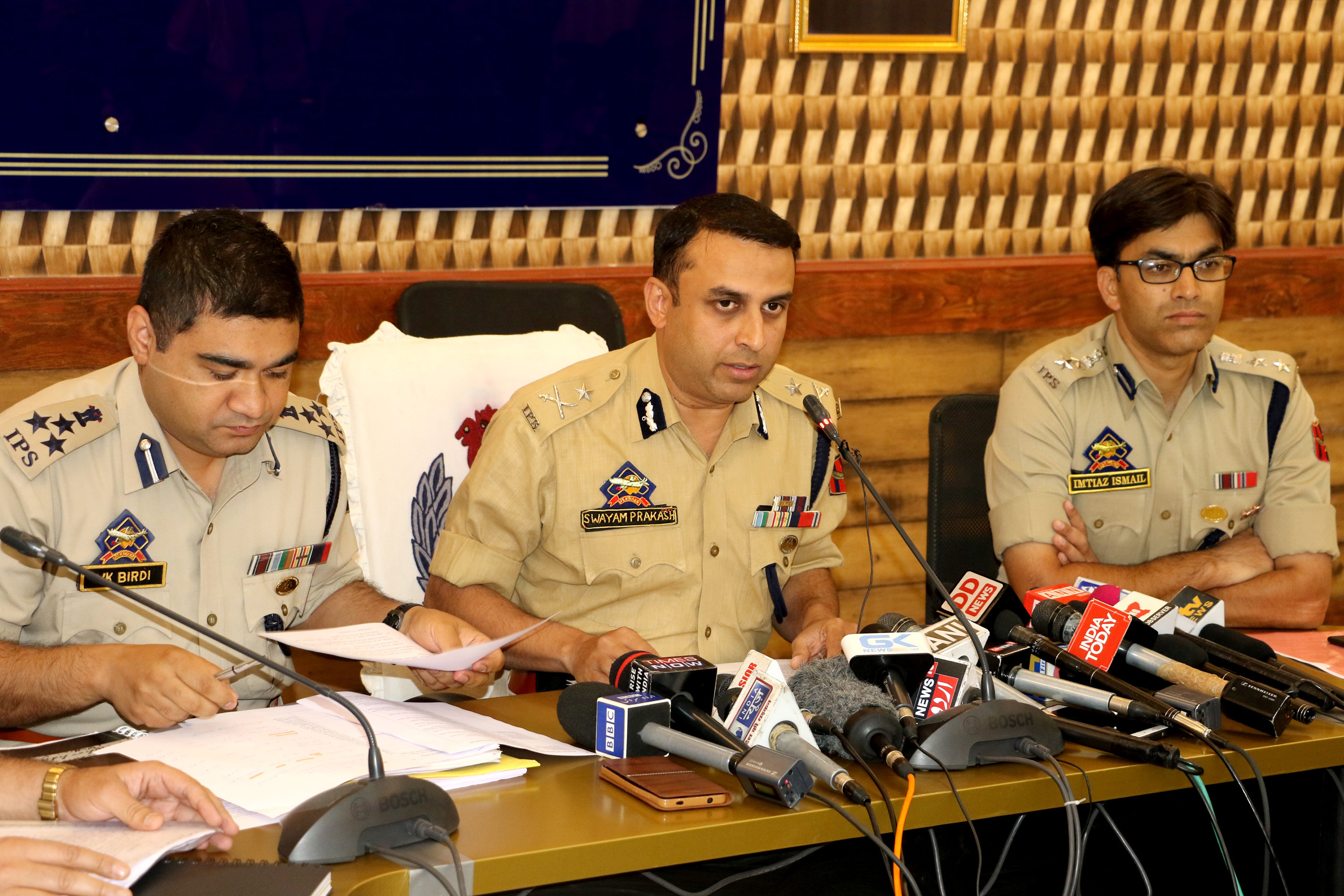 Fayaz Bukhari
SRINAGAR, June 28: Police today said that three Lashkar-e-Toiba (LeT) militants, including their commander who escaped from SMHS hospital early this year, are involved in the killing of senior journalist and Chief Editor of Rising Kashmir, Shujaat Bukhari.
Inspector General of Police, Kashmir, SP Pani, told reporters here at Police Control Room (PCR) that the conspiracy to kill Bukhari was hatched in Pakistan by Sajjad Gul and was executed by three LeT militants, including their commander Naved Jutt.
The IGP said: “From day one we maintained that the killing of prominent journalist Shujaat Bukhari and two policemen is a terror act. The investigation was carried out by the Special Investigation Team, which was headed by the DIG rank of officers- DIG CKR, SSP Srinagar and a team of officers. These teams of officers preferred and tried to understand the entire chain of conspiracy. There are four important individuals whom we have identified.
“The first accused is Sajad Gul, now based in Pakistan. He is from Srinagar. The second accused is Azad Ahmad Malik from Anantnag and a known LeT operative who was active since 2016. The third accused is wanted by the law by the name of Muzaffar Ahmad. He is from Kulgam district, an important LeT operative involved in the attack. The fourth accused is Naveed Jutt who escaped from the custody and is now active in South Kashmir”.
Pani said that the malicious campaign launched against Shujaat Bukhari prior to his killing was part of the conspiracy”. “There are two parts in the investigation-conspiracy and execution. As far as the first part is concerned, there was a campaign in social media platforms. Those malicious campaigns which were intimidated in at times and five or six posts came and those posts were in public domain. Apart from that there was a facebook page ‘Kadwa Sach’ and a twitter handle Ahmad Khalid. Now the investigation has revealed and we have tangible evidence to establish that these were from Pakistan. The evidence that we have with cooperation of the service providers, we have evidence that they belonged to Pakistan and they are part of the LeT conspiracy”, he said.
The IGP said that they have issued a look out notice to arrest Sajjad Gul. “The LeT conspiracy comes in picture because of the person called Sajad Gul. He is an individual who is now in Pakistan and he was earlier in the State. As per our investigation, he was arrested by the Delhi Police sometime in 2003, then he was also arrested in Kashmir by the Srinagar Police that was in the year 2016 by police station Parimpora for the terror cases. He obtained a passport and left country in March 2017. So at present we have gone for the look-out notice for cooperation to apprehend him as he is one persons who actually created those blogs”, he added.
Pani said that they have credible evidence of involvement of three persons whose picture was released earlier. “As far as the second part-execution is concerned, as you know, we released the pictures of three suspects after the incident, we have now got credible evidence to confirm the identity of these three individuals”, he added.
“So at the end of it there are four individuals-Sajad Gul, Azad Ahmad Malik, Muzaffar Ahmad and Naveed Jutt who are wanted by law and the investigation has so far established that this terror crime was done by proscribed terrorist organization Lashkar-e-Toiba (LeT), the conspiracy was hatched in Pakistan and the execution was done by the three accused who are now wanted by the law”, the IGP said.
Pani said that role of Junaid Qayoom who had picked up mobile phone and pistol from the spot is being investigated. “Besides, the other individual who was arrested by the name of Junaid Qayoom initially, the pistol and the mobile phone which was lifted from the scene of crime were recovered from his possession and his role is also being investigated in the case”, he said.