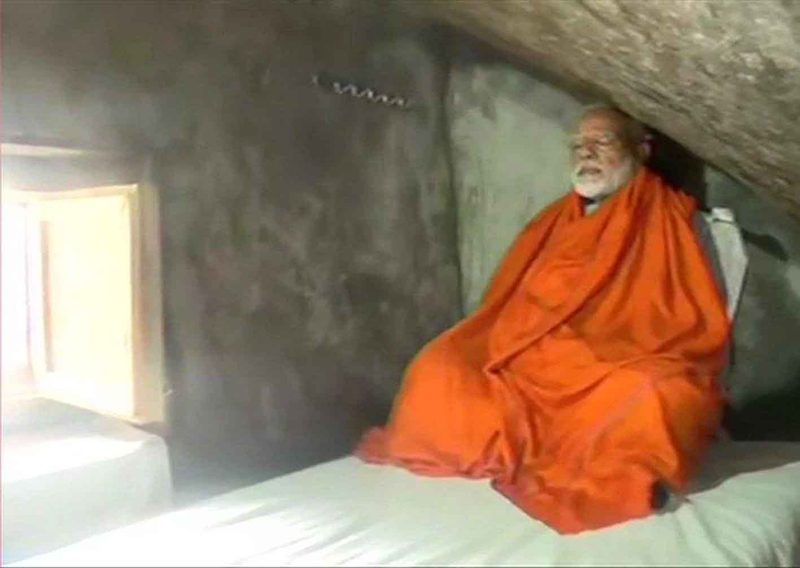 DEHRADUN, June 29: The cave at the Kedarnath shrine where Prime Minister Narendra Modi meditated last month has seen an unprecedented boost in popularity, with large number of devotees logging into the GMVN website daily to book the facility online.
The “dhyan gufa” (meditation cave) is booked for the whole of July and there are also advance bookings for different dates in August, September and October, Garhwal Mandal Vikas Nigam Ltd (GMVN) General Manager B L Rana said.
People from different parts of the country are logging into the GMVN website to book the facility, he said. Since the prime minister’s visit in May, not a single day has passed when the “dhyan gufa” was not occupied by someone, the GMVN official said.
The growing popularity of the unique facility in the serene environs of the 12,500 feet shrine in the Garhwal Himalayas has prompted the district administration to plan three more meditation caves in its vicinity, Rudrapradrayag District Magistrate Mangesh Ghildiyal said.
“We are planning to build three more such caves close to the existing one. In fact work on one has already started and the sites for the other two on the surrounding hills have also been identified,” he said.
Ghildiyal said the “gufa” has been in existence for nearly a year now but people have started showing interest only after the prime minister meditated there on the night of May 18.
When Modi came to visit the shrine, a photograph of the PM wrapped in a saffron shawl, sitting inside the cave with his eyes shut in a pose of meditation had gone viral on social media, giving the newly added tourist attraction the much needed promotional push, the DM said.
Better facilities created for pilgrims at Kedarnath coupled with the prime minister’s increased visits (Modi visited the shrine four times during his first tenure as PM) have even contributed to a dramatic rise in footfall at the Himalayan temple, which received a record 7,62,000 pilgrims in 50 days so far this year, Ghildiyal said.
Kedarnath had opened on May 9 this year for devotees after remaining closed for the winter.
“The number of pilgrims visiting Kedarnath during the entire yatra season last year was 7,32,000. There are more than three months to go for the end of the yatra sometime in October, and we hope the number this time is all set to cross the 10 lakh mark. It will be the first time in the history of Kedarnath,”  Ghildiyal said.
In 2012, Kedarnath had received 5,80,000 pilgrims. There was a sudden slump in footfall after the flash floods in 2013 which caused large-scale damage to the infrastructure in the area. As reconstruction of Kedarpuri started, the number of pilgrims began to rise from 2015 onwards, he said.
The Kedarnath area had witnessed unprecedented rainfall between June 14, 2013 and June 17, 2013, and the Chorabari lake had collapsed due to cloudburst, resulting in a major flash flood.
Several roads, buildings and other structures were washed away and, according to the state government, the estimated death toll was around 10,000, with over 3,000 persons missing.
Reconstruction of Kedarpuri, the township around the temple, is considered the pet project of the prime minister, who keeps reviewing its progress from time to time via video-conferencing. (PTI)