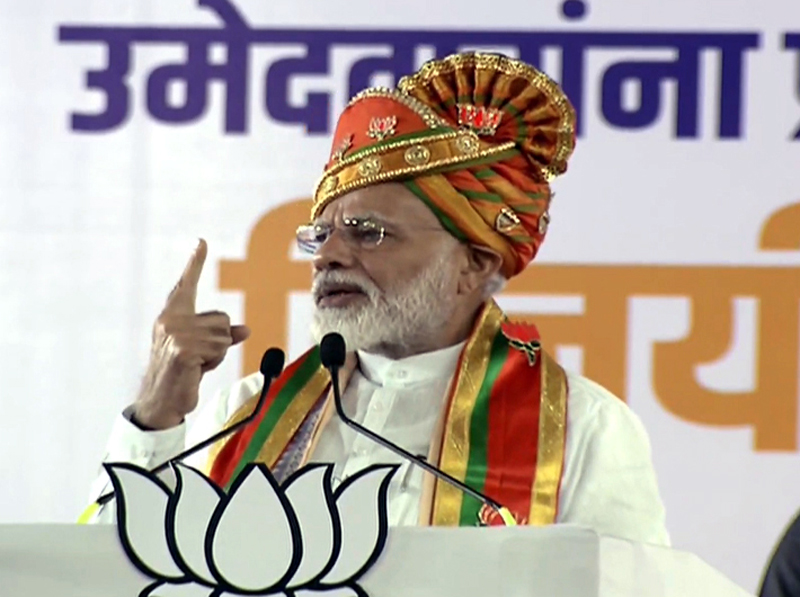 ‘Opponents of abrogation will have mention in history’

JAMMU, Oct 17: Prime Minister Narendra Modi said today that if the Congress leaders want to visit Kashmir, they should convey him and he will make all arrangements for them even as he came down heavily on the Congress for linking ‘Hindu-Muslim’ in the unity and integrity of the country.
“A Congress leader had said, this decision (abrogation of Article 370 in Jammu and Kashmir) will destroy the country. It has been 3 months, has the country been destroyed? Another Congress leader said that we have lost Kashmir by abrogating Article 370. Have we lost Kashmir? If you want to go to Kashmir let me know, I will make arrangements,” Modi said while addressing an election rally in Beed district of Maharashtra.
Targeting the Congress leaders for making unwarranted statements on Kashmir post abrogation of Special Constitutional provisions of the State and its bifurcation into two Union Territories of J&K and Ladakh, the Prime Minister said: “Another Congress leader had stated that had there been Hindus in Kashmir, BJP Government would have never taken this decision (abrogation of Article 370). Do you see ‘Hindu-Muslim’ in the unity and integrity of the country”?
Modi said history will have a mention of those who ridiculed the abrogation of Article 370 in Jammu and Kashmir and that Maharashtra now has an opportunity to punish them.
“I trust you and your patriotism that you will teach a resounding lesson to those who speak against interests of the country. History will take note of every person who ridiculed the abrogation of Article 370,” Modi said, alleging that the Congress leaders provided “oxygen” to anti-India elements.
Continuing his tirade against the opposition party, he said, “Some Congress leaders said Article 370 abrogation is like murdering someone, India-Pakistan issue is not internal matter, abrogating Article 370 will lead to disaster in the country, Kashmir has been lost…the list is so long that I will have to stay here till October 21 to spell it out.”
Modi said the country is looking at an opportunity to punish the Congress.
“The opportunity is knocking at Maharashtra’s doors. I have trust in your patriotism that you will teach a lesson those who speak against the national interest,” he said.
He also said that the process of jailing those who “looted” public money has begun.
PTI adds:
Noting that “lotus” (BJP’s poll symbol) has always bloomed in Beed district, Modi said the next week’s poll results will “break all victory records”.
“The Congress and NCP leaders must be gasping for breath seeing the huge response to BJP’s rallies,” he said.
Modi said Beed gave him friends like late BJP leaders Gopinath Munde and Pramod Mahajan.
“These two are no longer around. But, Chief Minister Devendra Fadnavis and Pankaja Munde (Minister and daughter of Gopinath Munde) are working to fulfill their dreams,” he said.
The BJP cadre is hard-working and winning hearts of the people, he said.
“While the Congress and NCP are fighting against each other, which is why many young leaders are quitting these parties, and the seniors are tired and dejected. Now the seniors are openly saying they are tired,” he said.
“Can tired people serve you? What is the need of such people? This poll is a battle of BJP’s ‘karyashakti’ versus ‘swarthshakti’ of the Congress and NCP,” he said.
Notably, senior Congress leader Sushilkumar Shinde last week said his party and the NCP have become “tired”.
Modi also highlighted the ‘Jalyukt Shivar’ water conservation scheme and the proposed Marathwada water grid, to provide relief to people the perennially parched region, as achievements of the Fadnavis-led State Government.
He also that said Rs 2,000 crore was already deposited in farmers’ accounts (as part of welfare scheme).