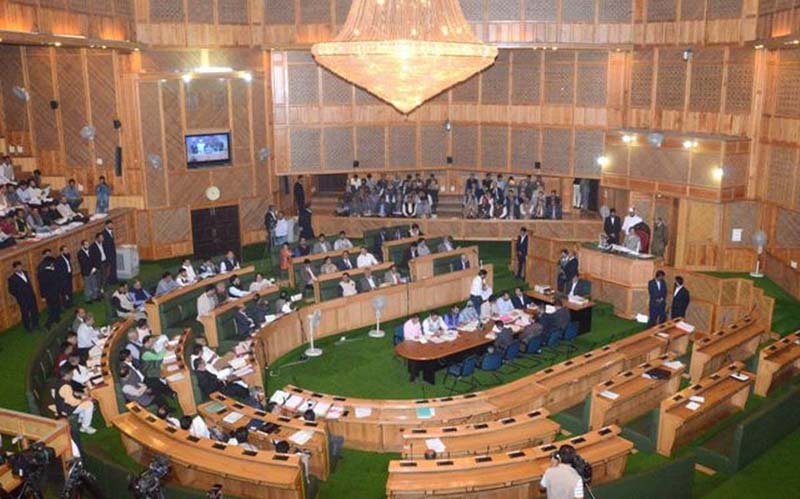 JAMMU, Oct 17: The Government today formally abolished 36-member Legislative Council, the Upper House of the State Legislature, rendering 22 MLCs including Chairman Haji Inayat Ali, who had recently switched sides from the People’s Democratic Party (PDP) to the Bharatiya Janata Party (BJP), as former legislators.
The Legislative Council had strength of 36 but presently, there were only 22 members including the Chairman, all of whom ceased to be member of the House with effect from today after the General Administration Department (GAD) issued an order in terms of Section 57 of Jammu and Kashmir Reorganization Act, 2019, which was passed by the Parliament on August 6. Click here to watch video
The Legislative Council has a total of 116 officials, who have been directed to report to the GAD by October 22. The GAD order said the Council vehicles will be transferred to the Director State Motor Garages while the Secretary will handover building of the Council along with furniture and electronic gadgets to the Director Estates.
The BJP, which rules the Centre, was the biggest loser with abolition of the Legislative Council as it had highest numbers of 11 members in the Upper House followed by PDP (seven), National Conference (three) and Congress (one).
Presently, there were only 22 members in the Legislative Council, which had total strength of 36, with 14 vacancies.
Out of 14 vacancies, four seats belonged to the quota of Panchayat members (two each from Jammu and Kashmir divisions), two from the quota of Urban Local Bodies (one each from Jammu and Kashmir divisions while eight other vacancies had arisen due to retirement of the members in March-April this year. They couldn’t be filled up in the absence of Legislative Assembly, which had been dissolved in November last year by Governor Satya Pal Malik.
“All 22 members of the Legislative Council have ceased to exist with effect from today,” official sources told the Excelsior saying though the Jammu and Kashmir Reorganization Act had proposed abolition of the Upper House, the formal order for winding up the House was issued today. The Jammu and Kashmir and Ladakh will become the Union Territories from October 31.
The BJP members who now ceased to be the MLCs included Haji Inayat Ali, last Chairman of the Legislative Council, Chering Dorjay (former Minister), Charanjit Singh Khalsa, Vibodh Gupta, Girdhari Lal Raina, Pradeep Sharma, Vikram Randhawa, Ashok Khajuria, Ramesh Arora, Ajatshatru Singh and Surinder Mohan Ambardar.
Anayat Ali, Dorjay, Khalsa, Vibodh, Khajuria, Arora, Ajatshatru and Ambardar had their term till March 2021 while Girdhari Lal Raina, Pradeep Sharma and Randhawa had their term till April 2023.
Seven PDP members, who lost their MLC status today were, Javaid Ahmed Mirchal, Yasir Reshi, Tassaduq Hussain Mufti (brother of PDP president and former Chief Minister Mehbooba Mufti), Surinder Kumar Choudhary, Zafar Iqbal Manhas, Saif-ud-Din Bhat and Mohammad Khurshid Alam.
Mirchal, Choudhary, Manhas, Bhat and Alam had their terms till March 2021 while Mufti and Reshi’s term was to expire on April 2023.
Two National Conference MLCs Qaiser Jamsheed Lone and Sajjad Ahmad Kitchloo had their term till March 2021 while Aga Syed Mehmood Al Mosavi was due to complete his term in April 2023.
Lone Congress member in the Legislative Council Balbir Singh had his term till April 2023.
Of 22 members in the Legislative Council, eight were Nominated including Tassaduq Hussain Mufti, Zafar Iqbal Manhas, Ashok Khajuria, Ramesh Arora, Saif-ud-Din Bhat, Ajatshatru Singh, Mohammad Khursheed Alam and Surinder Mohan Ambardar i.e. four each from the BJP and PDP.
Eight members had been nominated to the Legislative Council by the then PDP-BJP Government in March 2015 after the two parties stitched an alliance. One of the Nominated members, Vikramaditya Singh had later resigned from the PDP as well as membership of the House. The PDP had later replaced him with Tassaduq Mufti.
Rest 14 were the members elected by the Legislative Assembly. Eight seats which had fallen vacant in March-April this year couldn’t be filled up as the members had to be elected by the Assembly, which had been dissolved by then.
Eight MLCs who had retired this year included Naeem Akhter (former Minister), Yashpal Sharma and Firdous Tak of PDP, Muhammad Muzaffar Parrey, Naresh Gupta and Rani Billoria of Congress, Sofi Yosouf of BJP and Showkat Hussain Ganie of NC.