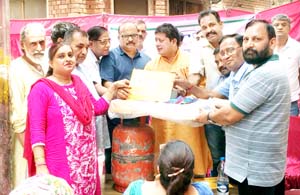 JAMMU, June 19: MLA Jammu East and party chief whip, Rajesh Gupta distributed free gas cylinders to the members of the SC & ST community under the Pradhan Mantri Ujjwala Yojna at Dalpatian Mohallla in Ward Number 05.
Free gas cylinders under the Ujjwala Yojna were distributed amongst fifty members of the SC & ST community.
Rajesh Gupta, while speaking on the occasion, said that the Pradhan Mantri Ujjwala Yojna is a wonderful scheme of the Government where the poor and marginalised sections of the society are provided cooking gas connections. He said that with this scheme, Government has brought comfort into the lives of millions of women who were otherwise using highly pollution causing mediums of cooking which also resulted in the infliction of lung and eye diseases on them. This scheme also prevents the use of firewood and helps in the preservation of trees and leads to the overall protection of the environment.
The prominent members of the Muslim community, who were present on the occasion, included Zahoor-u-din, Mohd Showkat Bhatti, Kazmi, Jehangir and Nikku.
The BJP leaders,  who accompanied the MLA,  included Chaman Lal, Gopal Gupta, Rajesh Gupta, Kuldeep Kandhari, Soudagar Mal, Tarsem, Krishen Lal, Jia Lal, Ashok, Raju, Dinesh Chouhan, P C Gupta, Subhash Sanghra, Rajinder Gupta and Adv Vageesh Bharti .