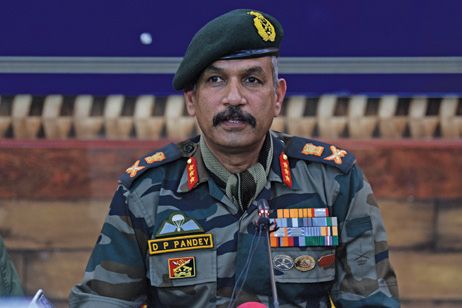 SRINAGAR: Militancy-related violence has reduced by around 50 per cent in Jammu and Kashmir, but some criminal elements controlled from across the border and by enemies within the country are trying to instill fear among people by killing unarmed people, a senior Army officer said on Thursday.

“The parameters of violence have decreased by nearly 50 per cent. The situation is very good and there is stability in entire Kashmir,” General Officer Commanding (GOC) of the Army’s Chinar Corps Lieutenant General D P Pandey told reporters on the sidelines of a function at Handwara in Kupwara district.

He said attempts are being made by militants to create an atmosphere of fear by targeting civilians, politicians and unarmed policemen.

“Some of these criminal elements are controlled from across (the border) and some by enemies within the country. The enemies are so frustrated by peace,  stability and development that they are killing shopkeepers, politicians and unarmed policemen,” Lt Gen. Pandey said.

He said he was confident that police will curb these small incidents.

Replying to a question, Lt Gen. Pandey said around 200 militants are active in Kashmir as on date.

The Army had organised a function to rename the Army Goodwill School at Bedkut in Handwara after Colonel Ashutosh Sharma, who was killed in an encounter with militants in May last year. (AGENCIES)