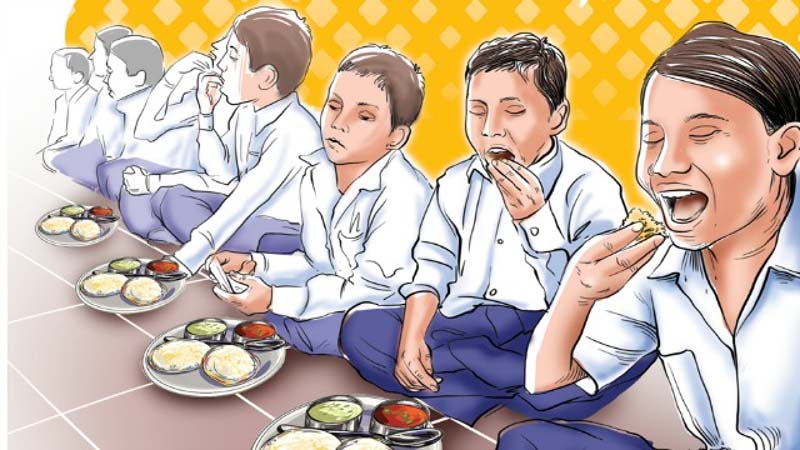 Excelsior Correspondent
SRINAGAR, June 18: In a significant decision, the Government has ordered the devolution of funds, functions and functionaries under Mid Day Meal Scheme to the Panchayati Raj Institutions (PRIs).
According to the order issued by School Education Department, the Government has directed for the devolution in pursuance to the provisions contained in the J&K Panchayati Raj Act, 1989 (amended up to October 2018).
The order said the preparation and distribution of Mid-Day Meal in the schools shall be carried out by the concerned Halqa Panchayats through the Community Level Committees (CLC) utilizing the services of cook-cum-helper(s) already engaged for the purpose by the respective schools.
The CLCs will be headed by Sarpanch/Administrator or Panch nominated by Sarpanch/Administrator. Its members will be two of Panchayat Halqa (preferably female) on rotation basis for one academic session to be nominated by Sarpanch/Administrator, five women from community, who are parents of children studying in the concerned school on rotation basis for one academic session, besides Teacher-in-charge MDM. The concerned Head of the Institution will be its Member Secretary.
Further, the Halqa Panchayat will ensure preparation and distribution of Mid Day Meals on each school day uninterruptedly, while fulfilling the minimum norms of nutrition as prescribed under the scheme and adhering to the procedures prescribed in the scheme and instructions from time-to-time.
The order stated that for preparation and distribution of Mid-Day-Meals in Primary Schools through local Self Help Groups/ NGOs/Community Level organizations funds will be transferred to Panchayats.
“The Halqa Panchayat will also ensure weekly quality check of the Mid-Day Meal through designated agencies and take immediate action, if any, adverse reports are received,” the order added.