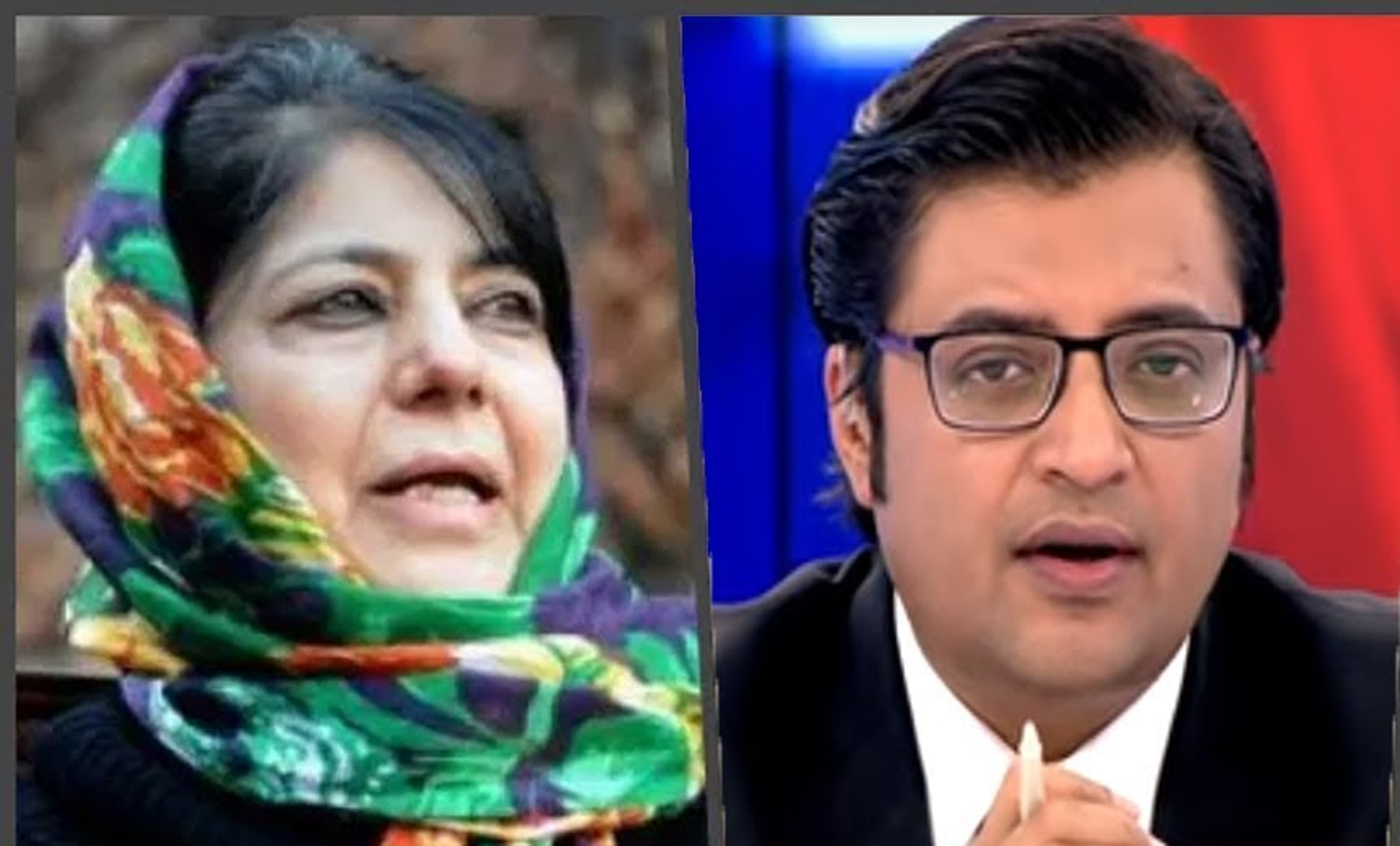 Neeraj Rohmetra
JAMMU, July 11: Former Chief Minister and PDP president, Mehbooba Mufti has served legal notice to Republic TV Editor-in-Chief, Arnab Goswami for controversial remarks against the former on his show and demanded unconditional apology.
The PDP president herself acknowledged on Twitter the news of her serving legal notice to the Republic TV Editor. “Wanted to put all speculation to rest & confirm that I have sent a legal notice to Arnab Goswami through my lawyer. Spewing malicious defamatory lies to grab eyeballs & TRP is no journalism”, she tweeted.

The program in question “Arnab Goswami on the Debate at 10”, was broadcast on July 5, when he had accused Mufti of undertaking lavish trips to Mumbai for expensive shopping.
The legal notice with reference number: LOSRJ/ Legal Notice/ Mehbooba Mufti /37-2019 Dated: 06/07/2019, whose copy is in possession of EXCELSIOR says, “on July 5, during the prime time program, you(Arnab) had invited multiple guests to debate over the topic highlighted through the hashtag “#KashmirFightsTukdeGang”. The programme in question contained statements about various political persons of J&K. However, a series of statements made by you were false, biased and targeted to malign the repute of my client (Mehbooba Mufti). The statements seemed to have been made with the sole intention to cause harm to the reputation of my client, as these are completely false, baseless and highly defamatory in nature”.
The notice further says, “the defamatory and false statements made by you on your prime time programme have been widely seen, circulated and shared on other social networking sites and web portals. Your statements project my client as a dishonest person who has made a fortune by deceitful means and is now spending it extravagantly. Right at the onset, my client outrightly denies these brazen allegations. My client has had an impeccable political career and never ever has faced any criticism where she has been projected as a dishonest person. Your statements on the said programme are full of lies and even while speaking you are not coherent and it clearly seems that you are making up these statements. Furthermore, the failure on part of both you and your channel as a whole to support these claims with any proof shows the malicious intent behind these statements and further proves that your allegations against my client are baseless”.
“That taking these statements in context of the entire programme it seems that you have tried to compare my client’s scrupulous honesty, hard-work and sacrifices for the people of Kashmir as well as her political ideology and approach with the actions and ideologies of those who are her total opposites. Thus, it is evident that you have published these statements with the intent to tarnish the image of my client. You have out of pure malice tried to connect a mainstream politician of the State of J&K with other politicians who have a different stand on Kashmir. You have stooped so low that you have labelled my client a ‘bloodsucker’ of Kashmiri people. This not only harms the reputation of my client but also undoes everything that my client has worked for all her life. It is pertinent to mention here that your statements hamper the political career of my client”, says legal notice sent by Mufti’s lawyer Sheikh Rizwan Javeed.
The documents stated, “that my client was the ninth Chief Minister of the State of Jammu and Kashmir and was duly elected through an efficient and fair electoral process of this democratic nation. The baseless, false and fabricated statements published by you have already been widely circulated and has caused irreparable loss to the reputation of my client who is a renowned public figure”.
The notice further said, “that the failure on your part to support the claims made in your programme with any proof shows your malicious intent and further proves that the allegations against my client are baseless and concocted. Your statements are an evil attempt at tarnishing my client’s image and reputation, which she has tried to build over decades of hard work and honest dedication towards the people of J&K.
While empathetically denying the allegation aimed at PDP president during the TV show, the notice claims, “the incorrect and grave allegations raised by you against my client amount to criminal defamation under Section 499 of the Ranbir Penal Code as well as Indian Penal Code, and is punishable under the penal laws of both J&K and India under Section 500. It is, thus, apparent that you have committed an offense of defamation for which you are liable to make good and compensate my client for the damages to her reputation that she has already suffered and which is continuous in nature”.
The counsel for the PDP chief has demanded an unconditional public apology through print, electronic and social media for the incorrect statements made and allegations levelled against her and by broadcasting the said public apology on Republic TV with the same prominence and frequency as the impugned statements.
The notice also sought an assurance to Mehbooba’s office, through a letter or e-mail, within three days from the receipt of this legal notice that Republic TV would desist from any further defamation of my client and will also ensure that you will apologize for the previous defamatory statements. “The channel would also withdraw and delete the said programme from the “Republic World” official YouTube Channel immediately and refrain from repeating any such acts on any public platform whether through your channel or social media or in any other form”, says the notice.
The document warns, “upon your failure to comply with the aforementioned directions within three days from the receipt of this notice, my client will be constrained to initiate both civil and criminal actions against you and your channel in accordance with law”.