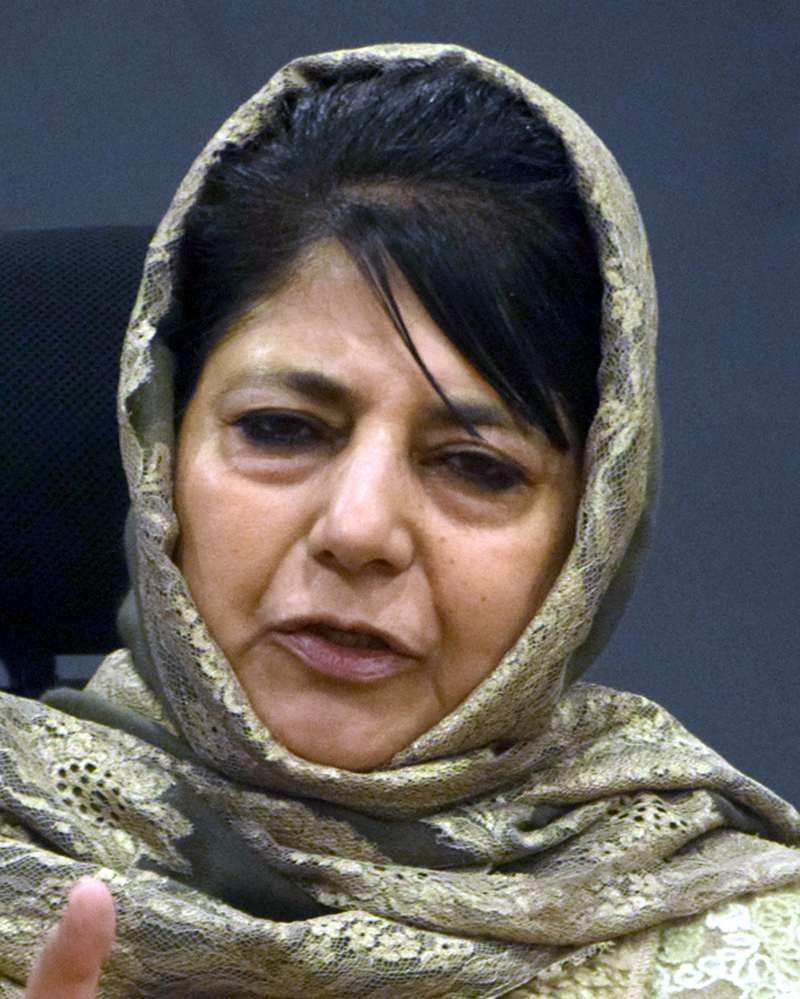 Srinagar, May 4: President of the People’s Democratic Party (PDP) and former Chief Minister Mehbooba Mufti has appealed Government of India to announce Ramadan ceasefire and asked militants to uphold sanctity of the holy month.
Mehbooba said this while addressing a press conference here ahead of holy month of Ramadan that starts early next week. “The month of Ramadan is in the offing-given the fact the J&K is the Muslim majority State-I want to appeal the Government of India to initiate a Ramadan ceasefire like it was done last year. Raids, crackdowns and operations should be stopped during this month so that some respite is given to already affected people of the State”, she said. Click here to watch video
“I want to tell the militants as well that they should upheld the sanctity of the holy month of Ramadan and shouldn’t make any attacks during this month”, she said.
The PDP president said that the GoI has made lives of Kashmiris as hell. “The Government of India has made the lives of Kashmiris as hell. I want to tell them if they want to keep the people of the State with them, they should do so with utter dignity. Modi ji usually says that he wants to follow the path of Insaaniyat, Jamhooriyat and I want to appeal him that this time also a Ramadan ceasefire should be brought in”, she said.
She said that the GoI has started war against its own people in Kashmir when the country is busy in elections. “As you all know that everybody is busy with elections in the country and it seems J&K is not attracting anyone’s attention these days. It seems that the Government of India has made the State the ring of war, where, they are at war with their own people”, she said.
“Be it the ban on Jamaat-e-Islami and JKLF, or the ban on the civilian traffic movement on National Highway, shutting down cross LoC trade, or what I read somewhere, that they are trying to intervene in the matters on the Government departments in the name of cleansing. Or they are mulling to interfere into the matters of J&K Bank by creating a slot for the MD. It seems that the Government of India, by making militancy a cover, is trying to destroy the people of the State”, the PDP president said.
She, without naming the BJP, held it responsible for harassing Gujjars in Jammu. “They are destroying the economy and fruit growers are getting affected by the highway ban. The people of Gujjar community are being harassed in Jammu by communal goons by the people of a party I don’t want to name”, she said.
“South Kashmir has been targeted specifically and youth are being arrested on the name of stone pelting. In such an atmosphere, where they have waged war on the people of the State, I wonder how they will carry the people of the State along”, she said.
Mehbooba said that political and economic space for the people of Kashmir is choked. “There are statements on daily basis against Article 370 and Article 35A, and on ground, they have left no stone unturned to push people of the State to the wall. Amid this, the alienation is only increasing with every passing day and at the same time political and economic space is being choked for the people”, she said.