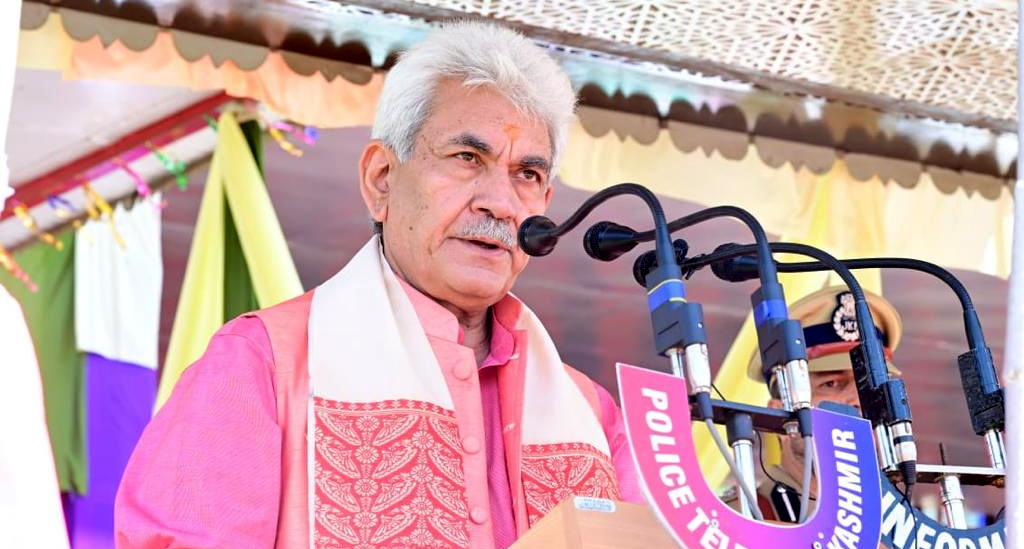 Ganderbal, Jul 31: Jammu and Kashmir’s Lieutenant Governor Manoj Sinha Sunday said that many areas in the UT have been cleared off the militancy and its eco-system stands fully damaged while efforts are on to root-out militancy from the entire region.
He, however, said narco-terrorism, if not handled in time, will emerge as a cancer. Addressing the passing out-cum attestation parade of 538 new recruits at Police Training Centre (PTC) Manigam, Ganderbal, the LG, said that police along with other security forces through its human and technical intelligence have been able to clear off many areas in J&K from the menace of militancy and its ecosystem. “But more needs to be done to root out the terrorism completely from J&K. Narco-terrorism is fast emerging as a biggest challenge and if it is not dealt in time, it can take the shape of a cancer. For eradicating militancy, you need to destroy all its off-shoots and tools supporting it,” the LG said.
He said that police in J&K were facing multiple challenges on many fronts. “In other states, challenges for police are less compared to J&K. Here, police have to maintain law and order, deal with social crimes, criminals, also with militancy and subversive elements,” the LG said and hailed the police force for facing all challenges bravely and in a professional manner.
He said that the police force is fast learning the art of countering technical and social media propaganda through the same means. “We have counter the social media propaganda by using online means and the police force is working hard on that front,” Sinha said.
He said that administration has been providing full support to police over the years and no stone will be left unturned to make the police force more efficient in the times to come. He said that new recruits who completed their course are not trained to do just normal policing, but to handle law and order, deal with militancy and are also trained to use computers to stay connected through CCTNS. (KNO)