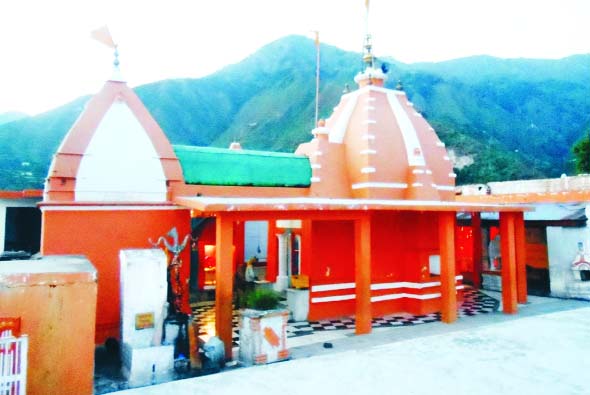 Sudhmahadev is a famous abode of Lord Shiva. Devotees visiting Sudhmahadev pay obeisance to Shoolpanishwar Mahdev temple often come back or go to Mantalai to see the birth place of Goddess Parvati along with Aparna Ashram of late Dhirendra Brahmachari . There are also other sight seeing spots of natural beauty. The Mahamaya temple located at a walking distance from bus stand Sudhmahadev or to say even nearer than the Shiva temple is not visited by the devotees. The temple is located on a hillock connected by a concreted lane is apparently a good sight seeing spot also. It is assumed that visitors are not familiar with this temple or not aware about the back drop of the temple. A sign board indicating way to Mahamaya temple has also been displayed but despite that number of visitors is minimal.
Mahamaya temple was constructed by Chenani kings. The fox symbol as on Sudhmahadev Shiva and other temples constructed by Chenani kings also exists above the door of Mahamaya’s temple. The Sudhmahadev temple was constructed by Chenani king Ramchand I and Mahamaya temple was constructed by succeeding kings. The name of the king who constructed the temple is not known yet some people believe that it was constructed by Gaggey Chand. There is a stone inscription held just above the door of the temple but it is not legible due to constant application of paint. It might contain the name of the king who has built the temple. A stone lion has also been erected and installed before the door of the temple. There is also a locally made iron trident installed just opposite to the door of the temple. Mace of baba kaliveer is also kept near the trident. There are three stone idols fixed over the door of the temple. They are lord Hanuman, Mahamaya, and Baba Bhairav. Presiding deity of the temple is Mata Sukrala. A pindi of Mata Sukrala has been installed on a small platform built in the centre of the temple. On the back side of Pindi there are other idols installed on the shelf built inside temple wall. They are Sheetla mata, Mall mata and queen. The idol of Mahishasurmardini has been kept on other side.
The legend about Mahamaya temple states that a Chenani king was married to a Bhadwal king family of Bllawar. The princess who later got married to Chenani King was a staunch devotee of Mata Sukrala from her childhood. Her parental family also considered mata Sukrala as Kuldevi. When marriage of Chenani Prince was commenced with that of princess, her parents were worried about the regular prayers of their daughter. They put a mace of mata Sukrala in the palquine when doli departed from Billawar with the contention to facilitate the prayers of princess. The queen continued her prayers in Chenani palace also as she was accustomed to do in parental house. There was a drastic change in the family affairs of Chenani king and queen. The engrossing family reason forced her to commit suicide. She immolated herself in Chenani palace and finished her life.
The tragic incident saddened the king. He attempted many ways to atone the multitudeness of the heinous sin committed in the family. Besides attaining forgiveness for the committed suicide of the queen he wished to get the blessing of Mata Sukrala as deceased queen was the devotee of Mata Sukrala. He attempted many ways to atone the sin and simultaneously planned to construct a temple of Mata Sukrala at Chenani near the palace. Due to unfavorable circumstances created in the family leading to the death of queen Mata Sukrala was angery with the king. It was advised by the soothsayers to construct a temple of Mata Sukrala to please the deity,
The Chenani king had gathered the building material to construct the temple of Mata Sukrala at Chenani. He called for the technicians to start the construction of the temple. Meanwhile Mata appeared in a dream and suggested him that he should immediately stop the construction of temple at Chenani.
In any case if he wished to construct the temple he should construct at Sudhmahadev area land of lord Shiva. The king obeyed what he saw during the dream. He selected the site for construction at the existing spot. He himself carried the first stone slab from Chenani and shifted to Sudhmahadev on foot. The rest of material was shifted by the laborers. Thus the construction of temple was carried out. The divine Pindi of Mata Sukrala was brought in a palquine from Billawar and installed in the temple.
It is said that all divine powers of mata Sukrala were shifted to this place. The people from Billawar came here and prayed mata not to shift all powers to this temple keeping in view the large number of devotees at Billawar. It was later decided that mata shall retain equal divine powers at both the places and fulfill the desires of the devotees. The local people also call this temple as “Hatya da Mandir”. The visitors going to Sudhmahadev must visit this temple also along with Shiva temple, and many other spots of sheer scenic beauty and religious importance.