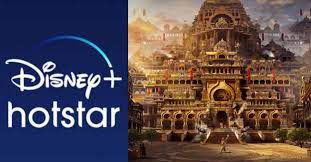 Anaheim(US), Sept 10: A new series adaptation of the epic “Mahabharat” is in development at Disney + Hotstar, the streaming platform revealed on Friday.
The project was announced by Gaurav Banerjee, Head – Content, Disney+ Hotstar & HSM Entertainment Network, Disney Star, during a session at the D23 expo here.
The show is based on one of the greatest epics of India, “Mahabharat”, and speaks of the ultimate conflict between ‘dharma and adharma’.
“There are over a billion people who know the story in some form, or the other. Most of them in my country have heard them as children from their grandparents, there are billions more who remain unaware of what they have been missing.
“It would indeed be a privilege to be able to bring this incredible story to a wider global audience next year,” Banerjee said at the International Content & Operations session at the Disney fan event.
The show will be produced by Madhu Mantena, Mythoversestudios and Allu Entertainment.
In a statement issued to the media, Mantena said he is delighted to have this opportunity to bring “Mahabharat” on Disney + Hotstar.
“It is said that every known emotional conflict experienced by mankind finds form in Mahabharat through its complex characters and storylines. We at Mythoverse are absolutely delighted to have this opportunity provided by Disney+ Hotstar to bring out a rendition of this great Indian epic ‘Mahabharata’ and to announce this news on a prestigious global platform at the D23 Expo,” the producer said .
During the session, a new Mumbai-set series starring Emraan Hashmi was also announced. Titled “Showtime”, the drama series brings forward all the off-screen fights for the power that runs the show.
The series, backed by Dharmatic Entertainment Production, has Karan Johar, Apporva Mehta and Somen Mishra attached as producers.
Disney+ Hotstar is also working on the eighth season of Johar’s celebrity talk show “Koffee with Karan”.
Produced by Johar, Apporva Mehta and Aneesha Baig, the show is currently in its seventh season.
“I am excited to associate with Disney+ Hotstar for our new collaboration, announced at the prestigious D23 Expo. In addition to yet another exciting season of my beloved show, ‘Koffee With Karan’ (Season 8), I am happy to announce an all-new Dharma Production series, ‘Showtime’, which will lift the curtain on India’s entertainment industry’s biggest trade secrets,” Johar said in a statement.
D23 Expo 2022 runs till September 11. (PTI)