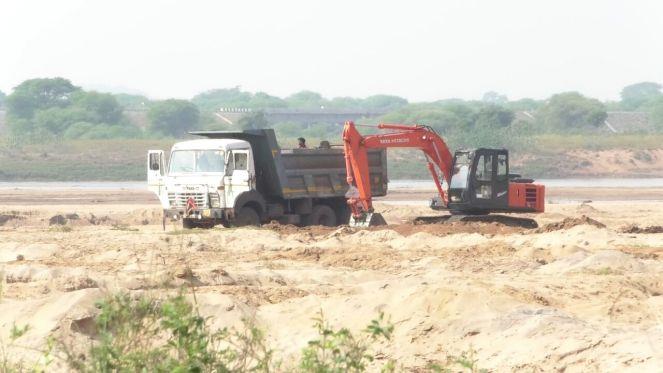 Despite HC ban, mining on in Tawi

Gopal Sharma
JAMMU, July 23: While ‘grey-gold’ mafia continued to fully control illegal mining in many rivers, streams and nullahs of Jammu region in connivance with some key Government agencies, many Government projects and the general public have been badly suffering as the rates of the building material like sand, gravel and stones have increased more than double in just one year under the plea of ban by the High Court.
The Department of Geology and Mining is losing major revenue in the region due to the mess created by the mafia and the system existing at present, while despite ban by the High Court on mining activity from Sidhra bridge to fourth Tawi bridge in the river, the mining activities go on during night and early morning hours. Even the stone crusher operators in the vicinity use their machines during night hours and are carrying on their activities calendestinely, the official sources said.
The sources revealed that after the High Court went on tough on the Geology and Mining authorities and Police for their failure to check illegal mining activity in river Tawi, the officers concerned started seizure of the tractor trolleys and Tippers loaded with sand, gravel and stones etc coming from Tawi side.
Even under the plea of ban, they started imposing huge fine even to the tune of Rs 10,000 to 50,000 per vehicle. With this activity, many vehicles stopped operation even in other areas. The rates of the building material which was hardly Rs 1000 per trolley in case of sand last year has now gone up to Rs 2500-2700, gravel from Rs 1500 per trolley to Rs 2800-3000 and stones from Rs 1000 to Rs 2400 per vehicle
With the strictness by the G&M Jammu authorities, the supply of building material has been dropped to nearly one third while rates of the material have gone more than double. Many loaded seized tractor trolleys are lying in Police Stations and Police Naka points in and around Jammu as poor operators are unable to pay huge fine of Rs 40,000 to Rs 60,000 per vehicle. So, they have abandoned their vehicles there for months.
The general public has been suffering badly as they have either abandoned their construction works or waiting for the outcome of the court orders or the suitable instructions from the Government in this regard. Moreover, many Government projects like roads, bridges, building constructions etc have been badly affected with the shortage of building material in Jammu and other areas.
Sources further added that vehicles which are operating during night hours or early morning are made to pay Rs 500 per vehicle at each Police Naka in their respective areas and the mafia is operating in connivance with some key officials of these two agencies. The new trend has begin as many people connected with mafia have created huge illegal dumps of material. They have fixed rates of material at their sweet will. There is no control of the District Administration or the Legal Metrology Department or the State G&M authorities. There is total chaos and the State Administration has gone into deep slumber.
Official sources further added that in Jammu district alone, hardly 60 % of the rivers/ streams/nallah blocks have been auctioned but the mafia has taken control illegally of the entire area.
In Pargwal area of river Chenab has not been auctioned since long but there also the same mafia is controlling the affairs illegally besides blocks in Akhnoor and Khour. The officers sitting at the top are well aware of the fact but have maintained silence due to the reason best known to them.
The same is the position in Udhampur, Reasi, Rajouri, Samba and Kathua districts besides some other areas. But nobody in the Governor’s Administration is worried about the situation created and come to the rescue of the hapless public which is being crushed with illegal activities. An appropriate court directive in this regard is also awaited.
It may be recalled that the Government had cancelled the open auction process as the District authorities had avoided `e-auction’ mode to facilitate some blue eyed people, but those influential people went to the court and brought stay and again continued their activities.
Joint Director, G&M, Jammu Ashwani Khajuria when contacted said since there is ban by High Court on the extraction of minor mineral in river Tawi, the officers of the department often seize vehicles which operate in the banned area. He said many vehicles have been seized by G&M staff during past 2-3 months and heavy fine was imposed on the operators.
When asked about the massive increase in the rates of material by mafia people at their own, he said it was not under the control of his department and moreover, district administration must look into it. When asked about the cancellation of auction by Government few months back, Khajuria said the party went to the court and brought stay order and they have resumed their work again. He claimed that department was contesting the case in the court of law. But the stay could not be vacated till now, the efforts were in progress, he added.
Deputy Commissioner Jammu, Ramesh Kumar, however, when contacted about the massive hike in the rates of building material and mess created by mafia in Jammu, said the matter has come to his notice recently.
“I have asked the concerned officers to conduct survey and find out the reasons. We are going to review the rates and take corrective measures shortly,” the DC Jammu claimed.