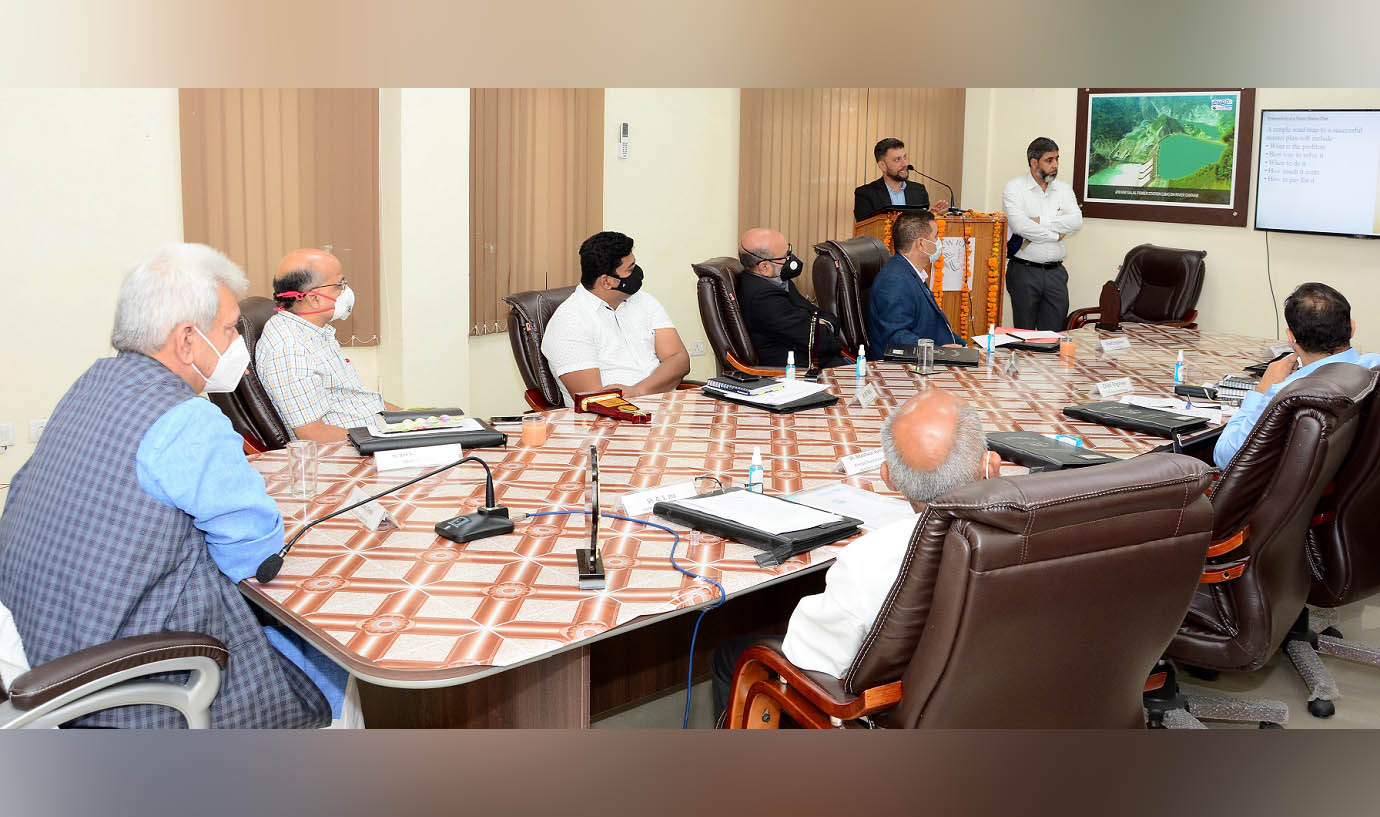 JAMMU: Conservation of water resources is the top priority of the J&K administration. The public should also come forward to realize its duty by understanding the importance of every drop of water.
Lieutenant Governor, Manoj Sinha made these remarks while reviewing the issues of Water Resources Development and Management in the UT at Jammu and Kashmir Water Resources Regulatory Authority (WRRA) complex, today.
The Lt Governor said that development is necessary, but it should not happen at the cost of natural resources. “I assure all the citizens of UT that no new locality or market shall be allowed to come up on water bodies. Conservation of water resources is the top priority of the UT administration”.
The Lt Governor observed that our UT is rich in water resources, but due to unplanned development and increase in population, the availability of clean water is very much in danger and hence, the management and regulation of water resources becomes more important.
Managing water should not be a concern only of the authority or administration. The public should also come forward to realize their duty by understanding the importance of each drop of water.
Pointing to the alarming situation of reducing numbers of ponds and depleting water resources, the Lt Governor citing a survey conducted in Jammu and Kashmir in 1998 noted that there were 1248 natural water sources, rivers, ponds etc. However, during the satellite mapping of the same in 2009, this number was reduced to just 565. It is a matter of serious discussion, he added.
Underscoring the value of water and water resources, the Lt Governor called upon all those involved in the management of water resources to understand the sensitivity of the situation.
Considering our water resources as living bodies, we have put in all our efforts for their effective management using technical tools, so that we can save water resources for the future generation, he added.
The Lt Governor observed that necessary focus was not given to water resources management in Jammu and Kashmir. There have been many discussions in the past on water resources development and management, rehabilitation of rivers and lakes and flood control, but no concrete work has been done on the basis of them.
The Lt Governor noted that in Jammu and Kashmir Water Regulatory Authority was established in 2012 and a water policy was also planned in 2016-17, but could not be implemented in a scientific way. Like the authority of other states and UT, in the Union Territory of Jammu and Kashmir, the authority had wide rights for inter-regional allocation of water, project evaluation, establishment of water tariff, etc. But still, there were many shortcomings.
Observing that all water resources are not self sustainable, the Lt Governor said that rational management is necessary for better and sustainable management of our precious water resources.
Quoting the old adage that necessity is the mother of invention, the Lt Governor said that the best water resources management done in the world is by Israel. Whether it is Drip irrigation, Advance Filtration, Water Leakage Detection, Rain Water Collection or Treatment System, all these techniques were invented by Israel. Israel has given a revolutionary contribution in water management system.
The Lt Governor also expressed his gratitude towards the Hon’ble PM for signing MoUs with a number of countries which are pioneers in Water Resources Management. Under these MoUs, technical expertise on water resources development and management is to be shared through the workshops. A number of states including Punjab, Maharashtra and Uttar Pradesh have taken the benefit of the expertise of Israel in Desalination of water bodies.
The Lt Governor asserted that with Sh. G. S. Jha as the Chairperson of the JK-WRRA, many previous issues have been resolved and with his rich experience as Chairman of Central Water Commission, much more work would happen in Water Resources Management in the UT. The Lt Governor assured all support of the UT administration to the Authority and added that sanction has been granted for filling 19 additional posts in JK WRRA.
Later, Israeli expert Mr. Niv Pintow gave a detailed presentation on Water Resources Management and optimum development in J&K. Pertinently, Mr. Niv and the team of Mekorot Company has already done significant work in Punjab and Maharashtra in the field of Water Resources management.
The Lt Governor further informed that an MoU has also been signed with a Space agency of England to provide necessary inputs in formulation of required plans to efficiently tackle floods like the one that happened in 2014. “This is a major step and will help in providing risk forecasts in terms of casualties due to floods in the river, collapse of buildings, disruptions in infrastructure and economic losses”, he added.
Er. Ghanshyam Jha, Chairperson Jammu and Kashmir Water Resources Regulatory Authority, described the agenda of the Authority and the policy framework to improve Water Assessment, inter-sectoral allocation, regulation, enforcement, irrigation, flood mitigation and other important issues for effective management of water resources.
He also thanked the Lt Governor for creation of 19 posts in the Authority for its smooth functioning.
BVR Subrahmanyam, Chief Secretary; M.Raju, Commissioner Secretary, Jal Shakti Department; Chief Engineers and other senior officers of Jal Shakti Department and JK WRRA were present during the presentation.