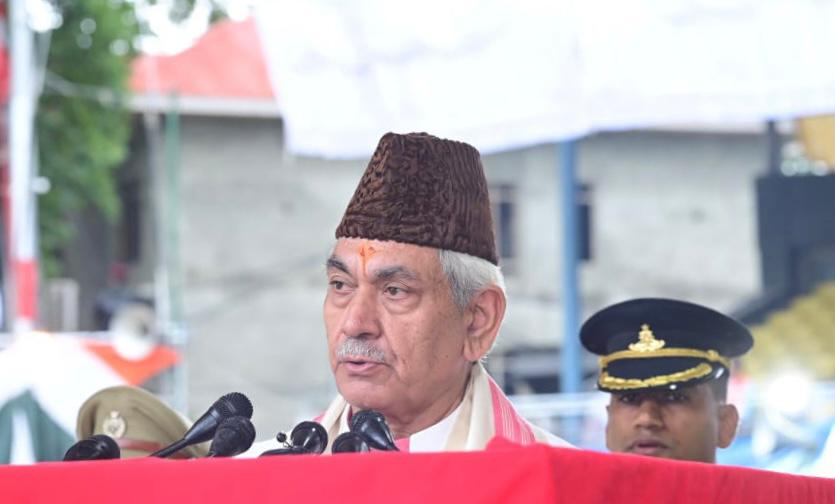 SRINAGAR, Aug 15: As Independence Day celebrations grip the country with enthusiasm and a sense of unity in nationalism, in Jammu and Kashmir, Lieutenant Governor Manoj Sinha participated in the main celebrations in Srinagar.
After the scheduled events, L-G Sinha addressed the people and praised the development of Jammu and Kashmir over the past few years. He thanked Prime Minister Narendra Modi for his leadership in taking the country, and Jammu and Kashmir, forward on the path of development.
Referring to the abrogation of Article 370 in J&K, L-G Sinha said that PM Modi had lit a lamp of modern economic and social development three years ago and added that the J&K administration has achieved notable accomplishments in the past years. “Despite various challenges, we have completed 50,726 projects in the last financial year with a five times speed,” L-G Sinha informed.
Calling it a “new dawn of hopes and dreams”, the J&K Lieutenant Governor asserted that the UT is scripting history and is recording unprecedented performance in every sector.
L-G Sinha also spoke about the efforts taken for the development and upliftment of the youth in Jammu and Kashmir and said that the ground of the 21st century, for realising the dreams and hopes of the youth, is being prepared in the valley.
The Jammu and Kashmir L-G, during his Independence Day speech, also announced that the administration has decided to observe August 5 every year as ‘Freedom from Corruption Day’ across the valley. Continuous drives against corruption will be carried out throughout the year, he added.