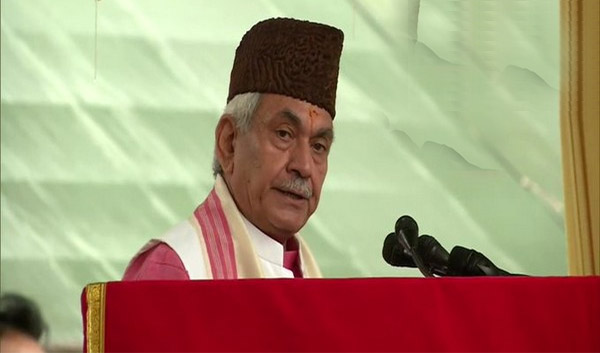 Srinagar, August 15: (With India celebrating its 76th Independence Day, Jammu and Kashmir Lieutenant Governor Manoj Sinha on Monday urged the people of Jammu and Kashmir to take a pledge to make the Union Territory Nasha-Mukt (free of drugs), Bhrashtachar-Mukt (corruption free) and Rojgaar-Yukt (employable).
“Jammu and Kashmir is on the move. I call upon every section of the society to make their valuable contribution to a happy, peaceful and prosperous Union Territory. On this Independence Day, let us take a pledge to make Jammu and Kashmir Nasha-Mukt, Bhrashtachar-Mukt and Rojgaar-Yukt,” he said while addressing the people of Jammu and Kashmir today.
Sinha said that the administration has decided that August 5 will be celebrated as Freedom from Corruption day every year in Jammu and Kashmir and continuous drives against corruption will be done throughout the year.
“Three years back, PM Modi lit a lamp of modern economic and social development in Jammu and Kashmir. Jammu and Kashmir administrations achieved notable achievements. Despite various challenges, we completed 50,726 projects in last financial year with a five-time speed,” he said.
The Lieutenant Governor said that in the new Jammu and Kashmir, the base of the 21st century for realising the dreams and hopes of the youth is being prepared.
Stating that stone pelting, strikes, closure of businesses and educational institutions was history, Jammu and Kashmir’s Lieutenant Governor Manoj Sinha Monday said democracy was fully flourishing in the Union Territory (UT) after tumultuous three decades.
“Stone pelting on roads, hartals and closure of schools and colleges is history now. Out of 365 days a year, 100 days would witness hartals that would take toll on business, and education of children studying in schools and colleges,” he said while addressing Independence Day function at the Sher-e-Kashmir Cricket stadium, here. (Agencies)