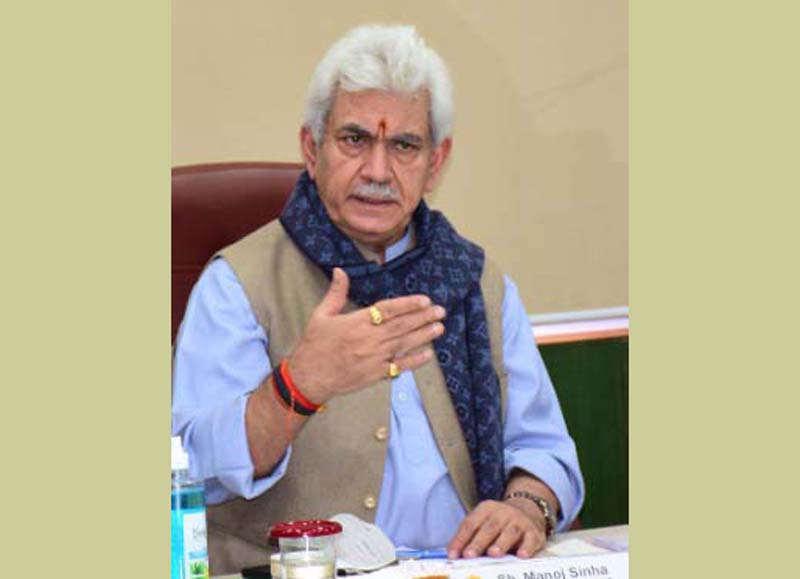 Chairpersons may get powers for Rs 5 cr expenditure

*All Committees to be formed in next 3 months

JAMMU, Jan 10: The Jammu and Kashmir Government is likely to relax conditions for expenditure of only 30 percent budget in last quarter to facilitate spending by nine District Development Councils (DDCs) of Jammu region which have so far incurred just 10-15 percent Capex budget.
The Government is also considering to grant the powers of up to Rs 5 crore approval to the DDC Chairpersons and has also directed the Rural Development Department (RDD) to complete entire process of conducting elections to five Standing Committees, infrastructure for offices etc of the DDCs.
These assurances were reportedly given by Lieutenant Governor Manoj Sinha to all 10 DDC chairpersons and 10 Vice Chairpersons in a meeting with them held here this evening.
Chief Secretary Dr Arun Kumar Mehta, Additional Chief Secretary (Finance) Atal Dulloo, Principal Secretary Home Shaleen Kabra, RDD Commissioner/Secretary Manjit Kour, Divisional Commissioner Raghav Langar and Additional Director General of Police (ADGP) Jammu Mukesh Singh were present in the meeting among others.
Some of the DDC Chairpersons and Vice Chairpersons told the Excelsior that barring Poonch district where 80-85 percent Capex (Capital Expenditure) budget has been utilized, the expenditure in rest nine districts of the Jammu region was confined to 10-15 percent so far.
“There has been condition laid down by the Finance Department that only 30 percent budget will be utilized in last quarter of the Financial Year. This way 50 to 55 percent Capex budget of nine districts will lapse,” the DDC Chairpersons and Vice Chairpersons told the Lieutenant Governor and sought relaxation of the 30 percent clause.
“The Lieutenant Governor assured us that 100 percent funds will be utilized and works completed,” they said, adding going by the assurance it is now amply clear that the Finance Department is likely to relax the condition for 30 percent expenditure in last quarter of the financial year.
They attributed just 10-15 percent expenditure in first three quarters of the financial year to tendering and retendering process as big contractors didn’t show interest in small works while cards to new contractors were delayed.
The DDC Chairpersons and vice Chairpersons said they demanded that they should be given powers of expenditure up to Rs 5 crore and added that the Lieutenant Governor assured them that this issue will be considered and needful done.
“We demanded that either the Deputy Commissioner should be made Chief Executive Officer (CEO) of the DDCs or we should be given powers for expenditure of Rs 5 crore,” they said, adding that Manoj Sinha gave positive response to their demand.
They said the Government has made Additional Deputy Commissioner as the CEO to the DDCs while the powers for expenditure were vested with the Deputy Commissioners.
The conferment of powers to the DDC Chairpersons will not only expedite development works but also empower the third tier of the Panchayati Raj Institutions (PRIs).
The Lieutenant Governor is understood to have directed Rural Development Department (RDD) Administrative Secretary Manjit Kour to ensure that all five Standing Committees of the DDCs are constituted within three months.
The RDD Administrative Secretary was also asked to look into all other issues raised by the DDC Chairpersons and Vice Chairpersons like infrastructure in the offices, manpower etc and address them within next three months.
Sinha is also reported to have asked the DDC Chairpersons to start plan for budget formulation for the next financial year of 2022-23 immediately.
Describing the meeting with the Lieutenant Governor as “very positive” and his response to their demands as “encouraging and satisfactory,” DDC Jammu Chairperson Bharat Bhushan hoped that the administration will stick to the timelines given by Sinha at the meeting.
Sources said the District Development Councils will now be able to utilize 100 percent Capex budget in view of the assurances given by the Lieutenant Governor in today’s meeting.
As per an official handout, the Lt Governor took first-hand appraisal of the district-specific developmental needs of the people and received feedback from the DDCs on implementation of developmental works and progress made under district Capex in their respective constituencies.
He reiterated the commitment of J&K administration for delivering good governance to the villages by strengthening Panchayati Raj Institutions.
“It is our firm resolve to remove developmental imbalances. Sustained economic growth, efforts to meet the basic needs of the people and better quality of life constitute priorities of district administration and PRIs”, Sinha said.
He acknowledged the crucial role being played by the DDCs & other PRIs in ensuring benefits of rapid economic growth flows to the lowest rung of the society.
Emphasizing the need to maintain transparency and accountability in the development process, the Lt Governor said that the efficient technological tools like BEAMS-EMPOWERMENT are helping in monitoring of projects & expenditure for smooth coordination so that projects are not held up due to inordinate delays.
“The DDCs are now regularly monitoring ongoing projects in districts and evaluating for timely implementation of all important programmes. The Government services are also being connected with a feedback system to bring fundamental changes in the public service delivery mechanism”, he added.
The DDC Chairpersons also submitted a 10-point memorandum to the Lt Governor regarding various administrative and other concerning issues.
The Lt Governor assured due consideration of the issues projected by the DDC Chairpersons and Vice-Chairpersons for their redressal at the earliest.