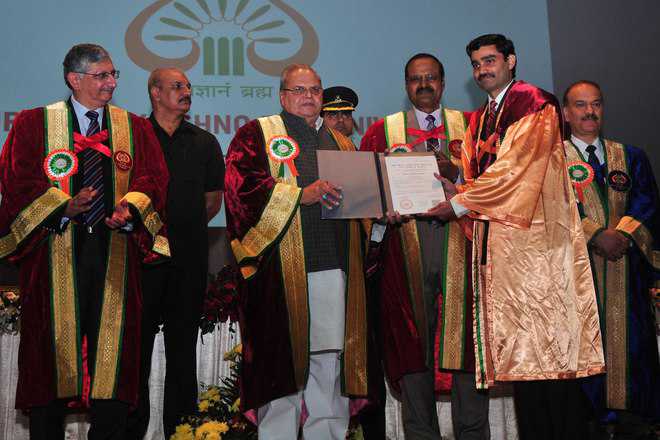 ‘MPs, MLAs were partners in BEd colleges with no faculty’

Excelsior Correspondent
JAMMU, Oct 22: Governor Satya Pal Malik said today that leaders of Hurriyat Conference and mainstream parties, religious preachers and clerics in Jammu and Kashmir have used their influence to get the children of ordinary Kashmiris killed while none of them lost their own to terrorism.
Alleging that “affluent and powerful” sections have crushed the dreams of the youths in Kashmir and destroyed their lives, Malik appealed to the people to understand the truth and join the Centre’s efforts to usher peace and progress in the State.

“Their own children are studying abroad and are well settled. But to the children of commoners, they show the “way to ‘jannat’ (paradise) to get them killed. All this has been happening here”, Malik said addressing the seventh convocation of Shri Mata Vaishno Devi University (SMVDU) in Katra town.
“Politicians, bureaucrats, affluent and powerful have crushed the dreams of the youths and destroyed their lives. The society leaders, religious preachers, Moulvis, Hurriyat Conference and mainstream parties have used their influence to get the children of ordinary Kashmiris killed. None of them have lost their own children and nobody from their families joined terrorism,” the Governor said.
Malik said that after joining as Governor, “I have not taken input from the intelligence agencies. They are not telling the truth to Delhi or us.”
“I directly talked to 150 to 200 youths and tried to identify those in colleges and universities who do not stand up for the national anthem. I talked to them and those in the age group of 25 to 30 years, whose dreams have been crushed, are misled and are angry… they do not want Hurriyat, us or Delhi Government or autonomy because they were shown that the way to paradise is by getting martyred,” he said.
The Governor said he told such youths that they already have a paradise in Kashmir.
“I want to tell the people of Kashmir and the youth to understand the truth. You have beautiful place in the world to live. Give it in the hands of Delhi which has opened its treasure for you. We are not going to take it (the place) anywhere. Come forward and be part of the new phase and tread the path of progress and development,” he added.
He recalled his visit to holy cave shrine of Shri Amarnath Ji and said, a local youth was not having a sweater but the politicians of this place have houses everywhere from here to Delhi to Dubai. Name a hotel or investment business, they are everywhere,” he said.
The Governor said he told the misled youths that he will offer them “two paradises”.
“I told them that it is your religious faith and I will not say anything about it. But I am ready to give you two paradises — one in this life and the second in afterlife… there can be a discussion whether you get the paradise after martyrdom or not, but as Emperor Jehangir had rightly said that if there is a paradise on earth, it is in Kashmir.
“You have already one paradise and you can turn into a crown of the world in this life and secondly if you die as a true Muslim, you will get the promised paradise. That means you can get two paradises, one here and second after the death,” Malik said.
He said the position of a Governor in the country is very weak as he does not have the right to hold a press conference or talk his heart out.
He also reiterated his statement that a section of wealthy people in the country are like “rotten potatoes” because they do not do charity or come forward to help improve the education system.
“Governor is a weak entity. He does not have the right to hold a press conference or talk his heart out. I remain apprehensive for almost three days after making a statement hoping that my words have not annoyed anyone in Delhi,” Malik said.
He said 22,000 Kashmiri youths are outside the State for education and accused the politicians of neglecting the needs of people of Jammu and Kashmir.
“Why do they have to go outside for education? It is because we have not been able to provide standard education in the State over the last many decades. If the money which was pumped into Kashmir was used by politicians and bureaucrats in a proper manner, the roof of your homes would have been of gold,” he said.
Malik said he had sanctioned 53 degrees colleges last year and is opening 50 more colleges, including professional colleges, in the State shortly. “I have upgraded 242 schools to Higher Secondary Schools overnight,” he said.
The Governor said there were 110 BEd Colleges majority of them owned by political leaders and powerful people where there was no faculty. In number of colleges, MPs and MLAs had partnerships; he pointed out and said the cheating was allowed in the examinations for clearing the papers.
“The Government ended the practice leading to fair examinations,” he added.