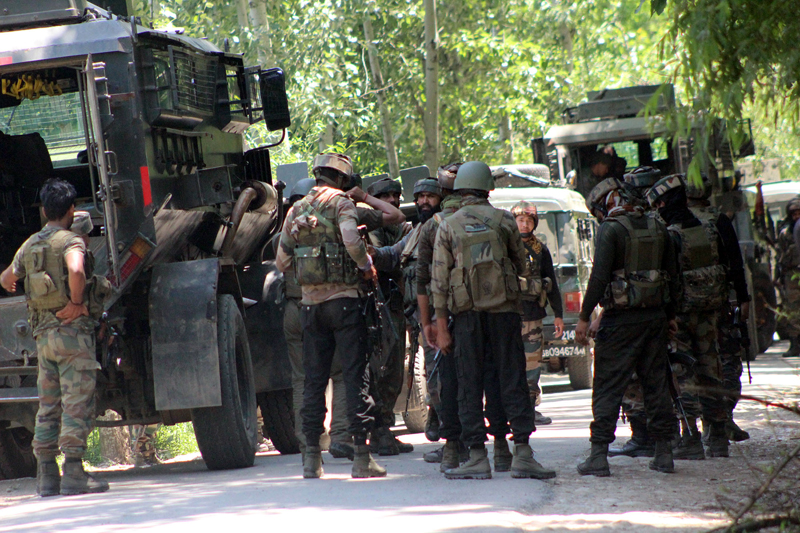 Fayaz Bukhari
SRINAGAR, Oct 22: A commander of Jaish-e-Mohammad (JeM) was among three militants killed in an encounter in South Kashmir’s Awantipora area of Pulwama district this evening.
Security forces including Army and Special Operations Group (SOG) of Jammu and Kashmir Police this afternoon cordoned off village Rajpora near Awantipora after inputs about presence of a group of militants of JeM including their commander hiding in the village. The village is adjacent to an Army camp in the area which acts as headquarter of the Army camps in the area.
The JeM militants when trapped fired on the troops leading to a gun battle which lasted for several hours. The troops used explosives to blast the house in which the militants were trapped after security forces encircled them. Three militants were killed in the encounter and their bodies were recovered from the debris of the house in which they were hiding.
One of the militants was identified as Naveed Hussain Tak R/o Naeena Batpora Pulwama and two others are believed to be foreigners belonging to JeM. However, they are yet to be identified. Three AK-47 rifles and eight magazines and other items were recovered from the encounter site. The search operation in the village was still going on.
This is the second encounter in South Kashmir in one week. Earlier, last week on October 16, three militants were killed in South Kashmir’s Bijbehara area of Anantnag district. They were killed in Pazalpora village in Bijbehara area of Anantnag district. These militants were identified as Nazir Gulzar of Arwani area of Kulgam, Aqib Hajam of Redwani area of Kulgam and Zahid Lone of Taqiya Maqsood Bijbehara in Anantnag district. One Insas Rifle and two pistols were recovered from the debris of the houses.
Security forces launched massive operations in South Kashmir after the killing of a truck driver and apple merchant in Shopian district and a labourer in Kakapora area of Pulwama district. Today’s killing of the three militants is believed to be a major success for the security forces.
In the meantime, a Government Middle School was set ablaze this evening at Watoo in district Kulgam by some miscreants. There were threatening by posters circulated in the village this morning asking people to observe shutdown and in the evening the school went in flames.