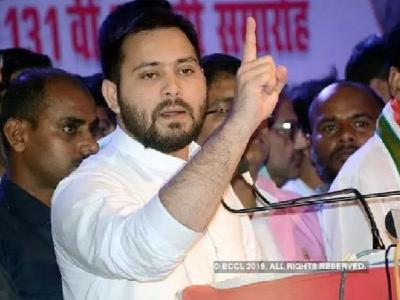 PATNA, Aug 22:
After a prolonged sulk over the Lok Sabha poll debacle for which they indirectly blamed each other, RJD supremo Lalu Prasads sons- Tejashwi Yadav and Tej Pratap Yadav- appear to have agreed to come out of their shells and bury their hatchet.
The scions gave up their squabble and hit the streets late Wednesday night here when they staged a demonstration that lasted for several hours in protest against the demolition, by municipal authorities, of a doodh mandi (milk market) in the vicinity of the Patna Junction.
Tej Pratap Yadav, the elder of the two, has for long been alleging that the younger brother surrounded by sycophants was being misled into taking political decisions that were hurting the party.
Tejashwi has refrained from reacting in public but is understood to have been upset over the frequent outbursts of his elder brother whose renegade stance during the Lok Sabha polls is said to have contributed to the partys dismal show in the general elections wherein the RJD, for the first time, failed to win a single seat.
Prasad, who had founded the party in 1997, is away in Ranchi serving sentences in fodder scam cases while his family, which controls the party in his absence, has of late left the cadres confounded with the infighting. On Wednesday, clamour for a generational change in the RJD arose with many party legislators speaking out in favour of their apparent Tejashwi Yadav replacing his ailing and jailed father Lalu Prasad as the national president
The demand by RJD MLAs could be seen in the backdrop of reports of family feud between Tejashwi and his two siblings active in politics- elder brother Tej Pratap Yadav and eldest sister Misa Bharti, a Rajya Sabha member.
Things appeared to have changed when the brothers hit the streets in protest against about a score of shops being razed in a drive carried out to remove encroachments from the crowded and congested streets that adjoin the railway station.
The dharna in which the brothers were joined by many leaders of their party including MLA, national general secretary and family aide Bhola Yadav, was reminiscent of the colourful politicking that was a characteristic of Lalu Prasad in his hey days, with fiery speeches and impromptu songs. (PTI)
The leaders and their followers carried their dharna into the thick of the night, braving intermittent showers and mosquitoes and insects that hovered around the water-logged streets.
The stir was called off after a written assurance from the municipal authorities that all the shops will be relocated at a distance of not more than 1.5 kilometres from the railway station.
Tejashwi Yadav, who returned to his home town only Wednesday morning after a prolonged absence, announced triumphantly sharing a screenshot of the letter from the municipal authorities after an eight-hour-long dharna, an assurance had come from the administration in the wee hours at 3 A.M. We have been fighting and will continue to fight.
Our struggle is always for the poor, never for power.
The dharna was the first occasion since the July 06 national executive meeting of the party when the two brothers were seen together in public.
Although the two brothers were not seen conversing much with each other, they seemed to be cautious about triggering any fresh speculations.
Tej Pratap Yadav, the elder brother normally perceived as a loose cannon, shot back at a group of journalists when they tossed at him queries about the family feud, dont you know he is my Arjuna.
The mercurial leader, who is fond of using mythological symbols to drive home his point, has been since long likening his younger brother to the warrior prince and asserting that he has chosen for himself the role similar to that of Lord Krishna, the charioteer-cum-strategist who ensured Arjunas victory in the epic battle of Mahabharata while himself staying away from the tussle for power. (PTI)