JAMMU, Nov 21: Former Deputy Chief Minister & BJP senior leader, Kavinder Gupta toured Gandhi Nagar Constituency and started work of drainage system worth 4.5 crore in Ward 56, Gangyal.
After in inaugural function in his address to the gathering present on the occasion, Gupta said that Union Government is committed to provide all basic amenities like adequate drinking water, power, education, healthcare and other civic facilities to the people of J&K, especially the areas where there is lack of basic amenities to the public.
He said the Gandhi Nagar constituency is moving towards achieving the status of a model constituency. In last four years Gangyal has witnessed a massive facelift by means of various developmental works viz. 32 crore worth Rajiv Gandhi Hospital additional block, 12 crore building of Nursing College, Shahidi Park worth 5.5 crore, roads worth three crore, deep drain in the middle of Gangyal worth more than 27 crore, Electric supply station upgradation etc. Prominent persons among local leaders of BJP & BJY present on the occasion were Baldev Billawria, Vinay Gupta, Bharat Bhushan, BJP Mandal president Satwari, Harbans Choudhary and Ranjeet Singh.
He said BJP believes in delivery instead of false promises as is done by other political parties. Referring to the developmental works under execution in Gandhi Nagar Constituency, Gupta said that the construction of various developmental projects is apace and on completion of these schemes it will change the socio-economic conditions of the people of the area.
Kavinder said that development programmes have been launched in the constituency with the aim to provide better amenities to the people. On the occasion, local people projected charter of demands which included construction and up-gradation of lanes and drains in the area. Gupta assured them that work on all the approved projects will be started as early as possible. He said the construction work on various ongoing developmental projects is apace in the area but the need of the hour is to utilize 100 percent funds earmarked for the current fiscal.
He asked the people to cooperate with the Government in implementation of developmental schemes and avail maximum benefits. Taking dig at previous representative prior 2014, Gupta said, “We don’t believe in beating drums for highlighting our works”, “The public service is our prime concern and the present Government is committed to provide the same. I inherited a constituency where every department was in a state of dismay”, he added. 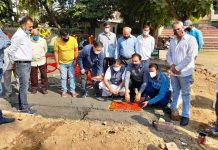