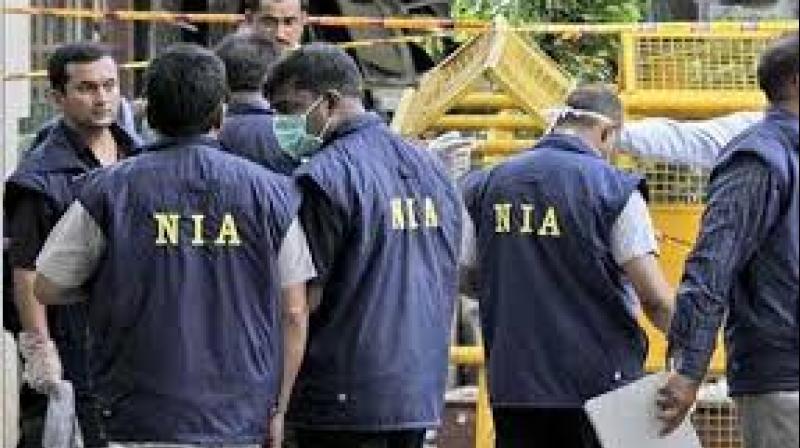 SRINAGAR/NEW DELHI: The NIA has issued summons to a Kashmir university PhD student, the head of a trader’s body and two Hurriyat leaders to appear before it tomorrow in connection with a case related to the funding of terror activities in Kashmir, officials said today.
Yaseen Khan of Kashmir Traders and Marketing Federation, Aala Fazil, pursuing a doctorate from Kashmir university, and leaders of pro-Pakistan Syed Ali Shah Geelani-led Hurriyat Conference, Abdul Hameed Magrey and Wali Mohammed, have been asked to appear before the National Investigation Agency (NIA) at its headquarter in New Delhi, they said.
Kashmir Trader’s body has called for a strike tomorrow to register its protest over Khan’s summoning.
Kashmir Bar Association president Mian Qayoom is likely to be summoned again by the NIA, the officials said, adding that many points related to his statement that was recorded earlier were being corroborated.
The people summoned to appear before the NIA tomorrow were likely to be questioned about alleged funding to various groups that pelted the security forces with stones, the officials said.
The NIA had registered a case on May 30 against separatist and secessionist leaders, including unknown members of the Hurriyat Conference, who have been acting in connivance with active militants of proscribed terrorist organisations Hizbul Mujahideen, Dukhtaran-e-Millat, Lashkar-e-Taiba (LeT) and other outfits and gangs, officials said.
The case was registered for raising, receiving and collecting funds through various illegal means, including hawala, for funding separatist and terrorist activities in Jammu and Kashmir and for causing disruption in the Valley by pelting the security forces with stones, burning schools, damaging public property and waging war against India, the probe agency said in the FIR.
Hafiz Saeed, the Pakistan-based chief of the Jamaat-ud- Dawa, the front of the banned terrorist organisation Lashkar- e-Taiba (LeT), has been named in the FIR as an accused.
The FIR also names organisations such as the two factions of the Hurriyat, one led by Geelani and the other by Mirwaiz Umar Farooq, the Hizbul Mujahideen and the Dukhtaran-e-Millat, an all-women outfit of separatists.
NIA has also secured confessional statements from two of the accused in the case.
A confessional statement is recorded before a judicial magistrate. The accused confirms in it that he or she is giving a statement without any pressure from the probe agency.
The entire process is videographed and no investigation officer is present in the court premises during the proceedings. In case of retraction later, the agency can file a case of perjury.
The NIA has arrested 10 people so far in connection with the alleged funding of terror activities case. The list includes Altaf Ahmed Shah, the son-in-law of Geelani, and noted businessman Zahorr Watali.
Geelani’s close aides Ayaz Akbar, who is also the spokesperson of the hardline separatist organisation Tehreek- e-Hurriyat, and Peer Saifullah have also been arrested.
Others on the list are Shahid-ul-Islam, spokesperson of the moderate Hurriyat Conference, Mehrajuddin Kalwal, Nayeem Khan, Farooq Ahmed Dar alias ‘Bitta Karate’, photo-journalist Kamran Yusuf and Javed Ahmed Bhat. (AGENCIES)