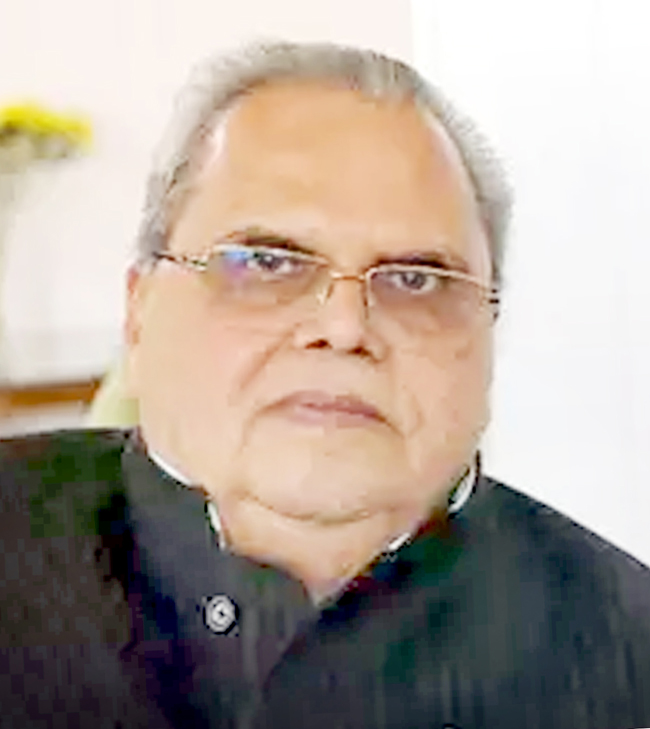 ‘First they sold ‘azaadi’, then autonomy’

Excelsior Correspondent
SRINAGAR, July 30: Governor Satya Pal Malik today again targeted the politicians of Kashmir describing them as “dream merchants’’ saying they first sold ‘azaadi’ and then “autonomy’’ to the people and reiterated that corruption was rampant in the State.
Speaking to reporters and addressing the Principals of Navodaya Vidyalaya, Malik said corruption was rampant in the State but the “disease has not developed overnight”.
“It is a result of mistakes committed by past Governments in Delhi, making people Chief Minister without contesting election or by rigging the polls, by declaring the winning candidates as losers. I consider the local leaders more guilty because they never spoke truth to the people,” he said.
Malik said the local politicians were dream merchants who first sold ‘azaadi’ and then ‘autonomy’ for Jammu and Kashmir to the people of the State.
“They would show such dreams to people…there was a time when my ‘shawl wala’ would ask me ‘would we get freedom?’ I told him you are already free and if you think freedom is going to Pakistan, go to the other side. Who is stopping you? There will be no freedom by breaking India,” the Governor said.

In a veiled reference to the National Conference, Malik said the leaders would “return from Delhi and address a gathering where they would display a green handkerchief to show that they have Pakistan’s support. “Pakistan isn’t able to handle its own (country), what good will it do to you?”
Seeking to put to rest speculations about a possible “major development” in Jammu and Kashmir, Malik said that “everything is fine, everything is normal” and rejected as “invalid” Government orders that had generated panic in recent days.
A series of Government orders, including the one which spoke of prolonged law and order situation, had generated widespread speculation that the Centre was planning to abrogate Article 35-A of the Constitution, which provides exclusive rights to immoveable property and Government jobs only to natives of Jammu and Kashmir.
Political parties in the State had reacted strongly to such a possibility, warning of dire consequences.
Dismissing the speculation, the Governor said, “Koi valid order nahi hai jo dikhayi diya gaya hai (There are no valid orders that are in circulation on social media)”.
The Governor was replying to questions about the orders floating on social media regarding storage of ration due to a possible law and order situation in the wake of alteration in the special status of the State.
The replies from the Governor seek to put to rest a week’s uncertainty that had been dogging the Valley especially after Centre had rushed 100 companies (10,000 security personnel) to the State.
“Kashmir is a place where if someone sneezes in Lal Chowk, the same incident is projected as a bomb blast at Raj Bhavan,” the Governor said.
“Many rumours float here on daily basis but please do not pay any heed to that. Everything is fine, everything is normal,” he said on the sidelines of a function at SKICC where he was addressing Principals of Navodaya Vidyalaya.