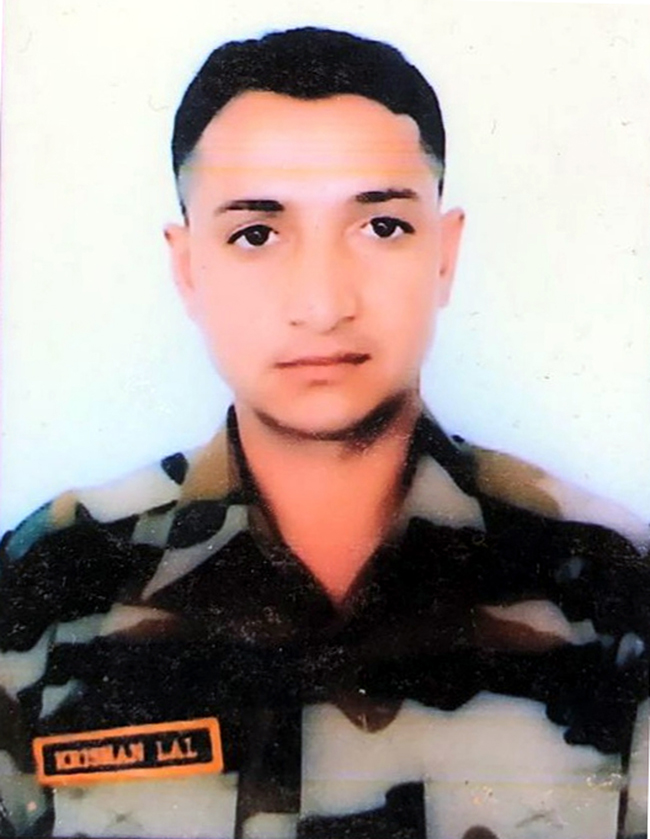 6 injured in shelling at Tanghdar
Army jawan martyred in Sunderbani

Excelsior Correspondent
JAMMU/SRINAGAR, July 30: An Indian soldier was martyred in Pakistan shelling and firing on the Line of Control (LoC) in Sunderbani sector of Rajouri district today while three Pakistan army personnel were killed in retaliatory firing by the Indian troops. Pakistan army also suffered huge infrastructural damage in the Indian retaliation.
Pakistan army resorted to heavy mortar shelling and firing targeting forwards posts of the Indian troops and civilian areas in Sunderbani sector of Rajouri district this afternoon. The Indian side retaliated effectively, leading to heavy exchanges which continued for more than two hours.
Official sources told the Excelsior that in the exchange of firing, an Army soldier attained martyrdom in Sunderbani sector. However, there were reports that at least three Pakistan army personnel were killed in the Indian retaliation. In addition, three to four Pakistan army posts were reported to have suffered heavy damage.
“Indian Army responded to Pakistan firing strongly and effectively. Heavy damage to Pakistan army posts and casualties to Pakistani soldiers have been inflicted by our troops,” a Defence spokesman confirmed.

Naik Krishan Lal, 34, attained martyrdom in Pakistan shelling and firing. He hailed from village Ghagriyal in Khour area of Akhnoor tehsil in Jammu district and is survived by his wife Shashi Devi.
“Naik Krishan Lal was a brave, highly motivated and sincere soldier. The nation will always remain indebted to him for the supreme sacrifice and devotion to duty,” the spokesman said.
Body of the martyr will be sent to his native village tomorrow with full military honours after the wreath laying ceremony.
Only yesterday, a 10-day old baby, who was injured in Pakistan shelling in Shahpur sector of Poonch district on Sunday, had succumbed to his injuries. Besides, his mother and another civilian were injured in the shelling.
On July 22, another Indian Army soldier Rifleman Mohammad Arif Shafi Alam Khan Pathan of Vadodra, Gujarat was martyred in Pakistan shelling and firing in Sunderbani sector.
Sources said the Indian retaliation to Pakistan army’s continued provocations on the Line of Control was necessitated to silence their guns and foil their plot to infiltrate militants into the Indian territory under the cover of firing and shelling.
There were reports that Pakistan army was trying to infiltrate militants into this side of the LoC in the garb of shelling and firing. So far, the Army hasn’t allowed any infiltration attempt by the militants on the LoC in twin border districts of Poonch and Rajouri to succeed, which has frustrated the militants, their mentors and the Pakistan army officials.
Meanwhile, four Army personnel and two civilians including a porter were injured as India and Pakistani troops traded artillery and mortar firing along the LoC in North Kashmir today.
Two civilians received minor injuries when Pakistani troops opened fire in Tanghdar sector this morning. One of them is an Army porter.
The intense shelling caused scare among the border residents. People were seen moving to safer places amid the rising tension.
All the educational institutions, shops and other commercial establishments were closed as the firing created panic in the area.
The Pakistani troops targeted forward posts in Rawan Post, Suri Post, Darshan Post, Jall post and Sharat post in Karnah, Balbir Post in Keran.
The heavy exchange of gun fires was going on till evening in which two soliders of 104 Brigade Tanghdar were also injured in the afternoon in Pakistani troop shelling. They have been identified as Sepoy Darshan Kumar and Naik Nitesh Kumar. Darshan Kumar has been airlifted to BB cantonment for treatment.
However, there was lull for several hours in the evening and the firing started again tonight in which two Army personnel were injured. They have been identified as Havaldar Manoj Singh and Sepoy Manoj Kumar of 2-JAT regiment. They were shifted to 168 Field Regiment hospital in Tanghdar.
Pakistan troops also violated ceasefire in Nowgam sector of North Kashmir and intermittent exchange of firing took place in the evening. They targeted Kenthawali Post in Jamgand area and Chokibal Post of Kupwara.
There was artillery firing in Uri sector also. The resident in Gingal area said that they heard heavy artillery fire from the Unit near their area. They said that it was going on till evening.
There was also firing in Gurez sector of North Kashmir this evening. The gun shots followed by mortar shelling took place near Panth Post in Bagtore area of Gurez sector.
Srinagar based Defence spokesman, Colonel Rajesh Kalia said that Pakistani troops resorted to unprovoked ceasefire violation including calibre escalation (Artillery fire) in Tangdhar Sector since 1300 hours today. “Our troops retaliated strongly, resulting in heavy casualties on enemy side”, he said.