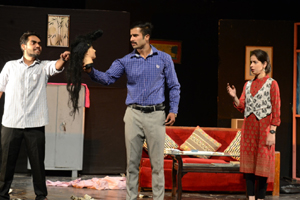 JAMMU, May 16: The almost 90-minute thriller ‘Kasak’, staged as the second play of Natrang’s ongoing theatre festival at the Abhinav Theatre, here today, left the audience spellbound due to the amazing acting skills of three young actors who successfully resurrected the genre of ‘suspense plays’ in the winter capital after a long gap.
The Hindi play written by Shailesh and director by Rahul Singh has already been performed in Natrang’s Sunday Theatre Series, but today’s performance, unshackled from the narrow confines of the Natrang Studio, seemed to achieve to its potential in the proscenium space of Abhinav Theatre.
Especially impressive was the way in which actors through their skill control of speech, modulation, potent pauses, and free-flowing movements, slowly built up the tempo of the play’s plot that is about the revenge of a person who was falsely accused by a police inspector and his writer girlfriend.
The elaborate set and props, appropriate sound effects, background music score and effective light design-all added to the slow building of the feeling of suspense that was savored by the highly appreciative audience.
Such a performance which once again successfully reiterated the magic of theatre also reflected upon Natrang’s 35 years of institutionalized grooming of winter capital’s and Jammu region’s young talent in the field of theatre acting as well as direction.
The magnificent actors who performed in the play were Kushal Sharma as Chandrima Desai, Goutam Sharma as Pratap Thapa and Gautam Kumar as Rajnikant. Voice over was given by Aishwarya Sathe and Sushant Singh Charak. Music was rendered by Brijesh Avatar Sharma. Set was by Rohit Verma and lights were executed by Shivam Singh, music by Mohit Kaul and Brijesh Avatar Sharma, properties by Ankush Lakhnotra and production managed by Mohd. Yaseen.
Tomorrow, play ‘Mind Games’ written and directed by Sumeet Sharma will feature at 6 pm at Abhinav Theatre, Jammu.