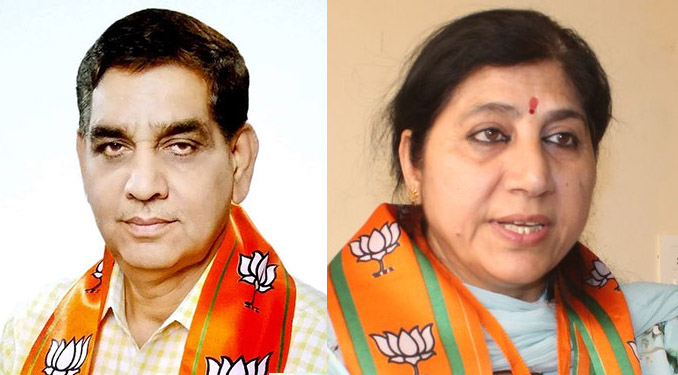 Jammu, Sep 24: Jammu Municipal Corporation (JMC) mayor Chander Mohan Gupta and his deputy Purnima Sharma on Saturday submitted their resignations after a meeting chaired by Jammu and Kashmir BJP president Ravinder Raina here.
Both Gupta and Sharma resigned voluntarily and expressed their desire to work for strengthening the organisation (BJP), Raina told reporters after the joint meeting of the party corporators and leaders.
He said the meeting lauded the role of Gupta and Sharma during the past four years, especially in implementation of projects under the Jammu Smart City.
“The party will decide the name of the next mayor and the deputy mayor in consultation with the corporators,” Raina said.
A BJP leader said a meeting of the corporators and senior leaders has been convened at the party headquarters on Sunday to reach a consensus on the name of the new mayor and the deputy mayor.
BJP national general secretary Tarun Chugh is also attending the meeting, he said, adding the names of the new mayor and the deputy mayor are likely to be announced on Sunday evening.
Gupta and Sharma took over their respective posts on November 15, 2018, after the BJP swept the prestigious JMC, winning 43 out of the 75 wards. The urban local bodies elections were held in four phases from October 8-16 in 2018 after a gap of 13 years.
The leader said the BJP had initially decided to change the mayor and his deputy after they complete their half terms. However, due to the outbreak of COVID-19 in 2020, the party decided to continue with both of them, he added. (Agencies)