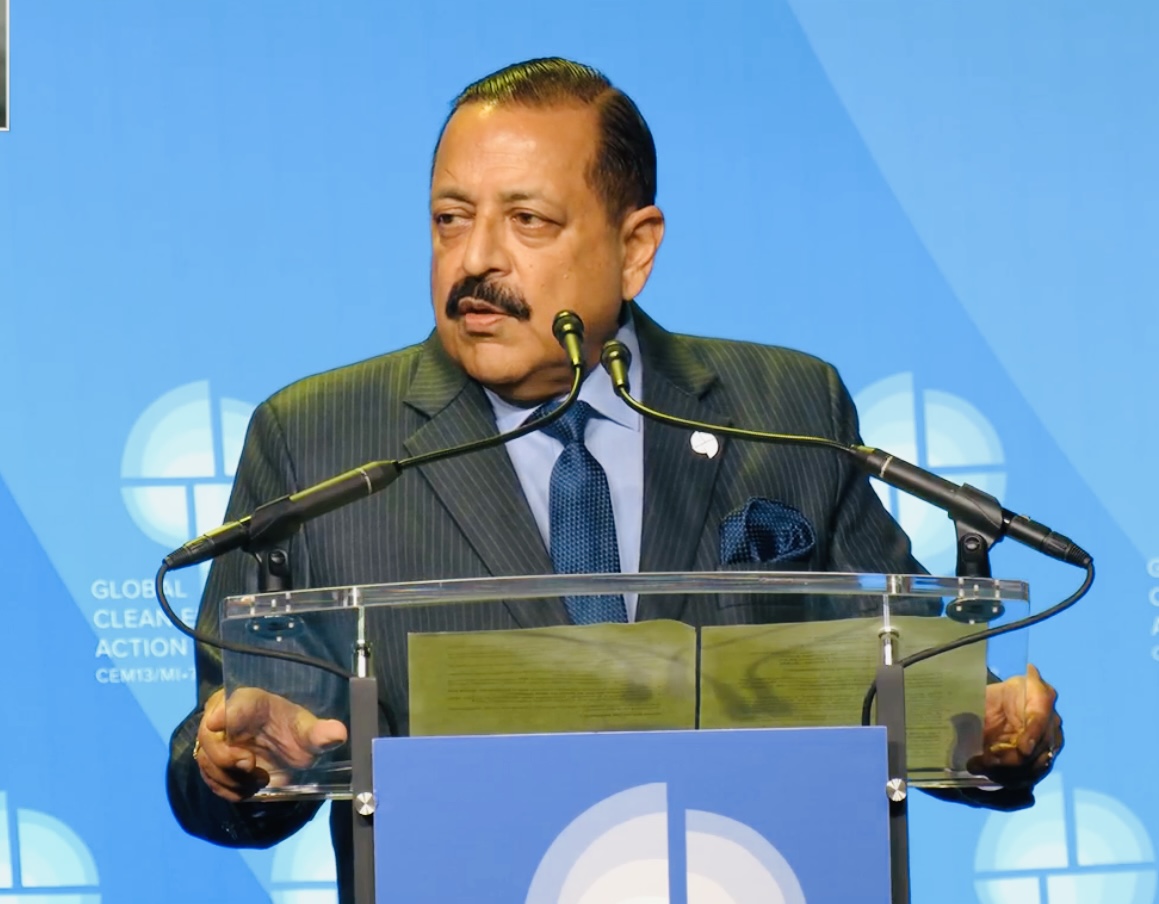 PENNSYLVANIA, September 24 : Dr Jitendra Singh, who is leading a high-level Joint Indian Ministerial Delegation of Ministry of Power, New & Renewable Energy and Ministry of Science & Technology at the “Global Clean Energy Action Forum-2022” ,said that sustainable biofuels play key role to reduce Green House Gas (GHG) emissions from the transport sector.
He said, Prime Minister Narendra Modi has been consistently encouraging and monitoring Net Zero endeavours.
Addressing the Main Stage Summit Event on “International Collaboration to Accelerate the Clean Energy Transition” at Pittsburgh, Dr Jitendra Singh said, India, through the Department of Biotechnology, has been supporting R&D innovations in Advanced Biofuels and Waste to Energy technologies. He also informed the Energy Ministers from 30 countries taking part in the conference that India has established 5 Bioenergy Centers with an interdisciplinary team working on advance sustainable biofuels using modern biotechnology tools.
Dr Jitendra Singh said, in April this year, when India hosted the MI Annual Gathering at New Delhi, the Mission Integrated Biorefineries was launched by Co-leads India and Netherlands, uniting key members, international organizations, the corporate sector, academic institutions, and civil society to accelerate innovation for renewable fuels, chemicals, and materials for a low-carbon future.
At another side event on “India Clean Energy Showcase” at Pittsburgh, Dr Jitendra Singh said, India being one of the founding members of the Clean Energy Ministerial (CEM) will be hosting CEM-14 in 2023 in Bengaluru along with its Presidency of G-20 in the same year. He said, in fact, this will mean hosting the CEM meeting during the first year in the new third phase (July 2022 to June 2026) to push major acceleration in clean energy deployment, consistent with achieving the clean energy goals of its members and putting the world on track to achieve clean, affordable, reliable energy for all.
Dr Jitendra Singh said, India is among the few countries in the world to design a Cooling Action Plan (CAP) with a long-term vision (spanning a 20-year period from 2017-18 to 2037-38) that addresses cooling requirements across sectors. He said, it identifies possible actions to reduce cooling demand arising from residential and commercial buildings, cold chains, etc., covering aspects of building design and technological innovations that do not compromise on energy efficiency.
Dr Jitendra Singh said, India stands at the forefront of addressing the global challenge of climate change and has committed to an ambitious Nationally Determined Contributions (NDCs) of reducing emission intensity by 33-35% in 2030 against the levels of year 2005. He added that India has remained steadfast in its transition towards clean energy achieving the fastest pace of renewable capacity addition amongst all major economies and ambitious transition goals articulated by Prime Minister Modi, in India’s Panchamrit declaration at COP26.
The Minister also reiterated that India is also implementing the largest Renewable Energy (RE) expansion program in the world envisaging a 5-fold increase in the overall RE capacity in the country from 32 GW in 2014 to 175 GW by 2022, and further to 500 GW of renewable power in the country by 2030.
Dr Jitendra Singh said, as seen in the climate negotiations in recent times both the governments and non-governmental entities are making commitments to help countries implement their net-zero pledges. He, however, cautioned that despite these commitments, the global average temperature in 2100 is expected to rise to around 2.1°C above pre-industrial levels. The Minister pointed out that this falls short of the goals stipulated in the Paris Agreement, which calls for limiting the global temperature to 1.5°C above pre-industrial-era levels by the end of the century. He added that in the light of this, a pivotal move to bend the global emissions curve becomes imperative and immediate climate action is especially critical for a post-pandemic future through renewable energy transition, which is vital to building a resilient and secure future energy system.
Dr Jitendra Singh concluded by saying that the CEM setup has been able to provide a unique opportunity for India to showcase its contribution to clean energy development both within and outside the country. He further added that India is one of the fastest growing economies in the world and has witnessed rapid increase in the energy consumption mainly due to rapid economic growth, access to affordable energy, increased industrialization, building infrastructure and other end uses of energy.